The Evolution of the Armed Merchant Cruiser

In the beginning was the Hecla, launched on the 7th March 1878, at the shipyard of Messrs Harland & Wolff of Belfast as the ss British Empire, under the houseflag of the British Shipowners Company Limited of Liverpool. Destined for the Far East trade, she was to be commanded by Captain F. Lecky FRGS, whose wife christened the ship. The company owned and operated a fleet of sailing ships, one of the largest sailing under the Red Ensign, and on 23rd August 1878, she swung her compasses in the Carrickfergus Roads. Arriving at Portsmouth four days later, she was commissioned for trials as HMS Hecla, an 'Armed Merchant Cruiser'.

Purchased by the Admiralty at a cost of £120,000, she was described as 'a fine four-master vessel, carrying thirty Whitehead torpedoes, launched from tubes below the waterline..... 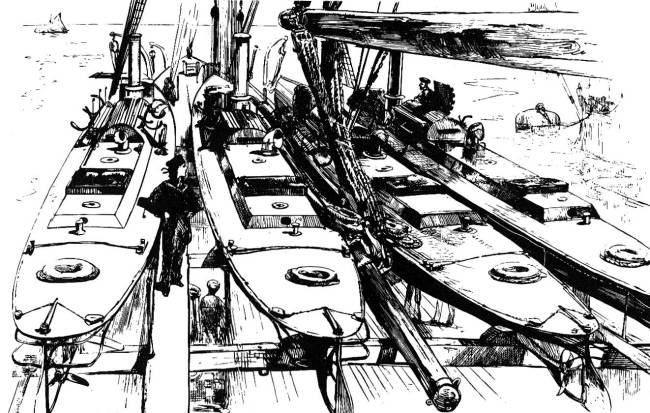 plus a complement of no less than six, specially constructed steam-powered 'torpedo boats, each measuring sixty feet in length.

The press soon got word, and on 12th October, The Illustrated London News published a detailed account of the ship and its capabilities, drawing attention to the Supplementary Naval Estimates, wherein a Mr W. H. Smith had referred to the preparations being made for the 'arming of merchant steam ships', and the purchase of a suitable merchantman, the ss British Empire, in order to prove the practicality of the Navy's innovative new concept. 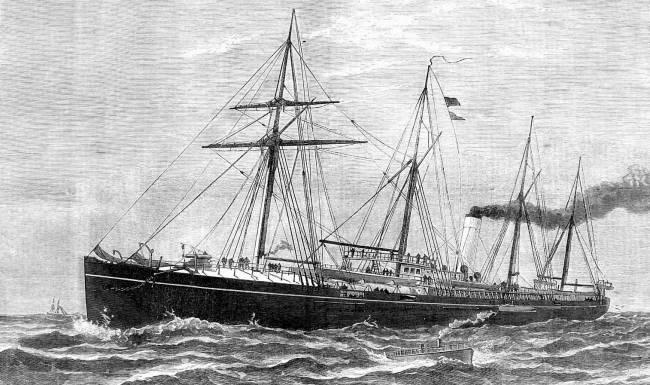 HMS Hecla, with a Torpedo Boat deployed and a 64-pdr Gun mounted forward. 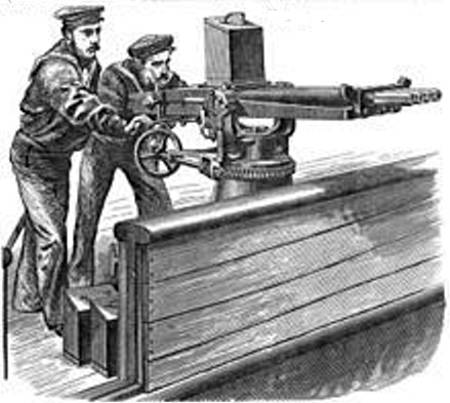 Initially, Hecla's main armament comprised six Nordenfelt one-inch quick firing guns. Their successful operation resulted in similar guns being deployed at strategic ports across the British Empire. It was also recommended that a 12-ton 9-inch gun should be mounted fore and aft 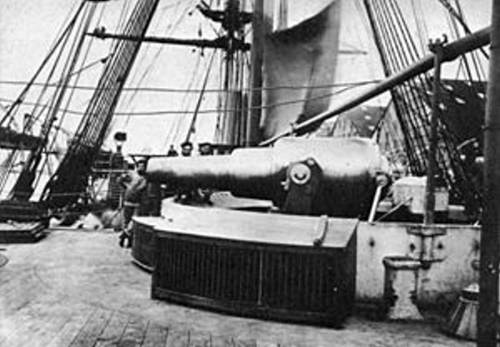 Following the declaration of war, the Admiralty commandeered nearly half the P&O Company's fleet for use in the conflict, employing them as Armed Merchant Cruisers, troop transports and hospital ships. Seven ships were converted to AMCs: Himalaya, India, Macedonia, Mantua, Moldavia, Marmora, Morea and Berrima.+

On 13th March 1915 the India was chartered by the Admiralty and fitted out as an Armed Merchant Cruiser, followed by the ss Moldavia on 27th November.

The British blockade of Germany from 1914-1919 was one of the largest and most complex undertakings attempted by either side during the First World War. While Britain employed considerable resources in other areas of the conflict, the blockade became the source of the United Kingdom's greatest effort. As the historian Eric W. Osborne noted in 2005, "It is true that the exploits of the British Army and Royal Navy aided greatly in the conflict, but Britain's greatest contribution to the allied cause was the largely unseen economic pressure occasioned by naval supremacy through the imposition of a blockade of Germany." 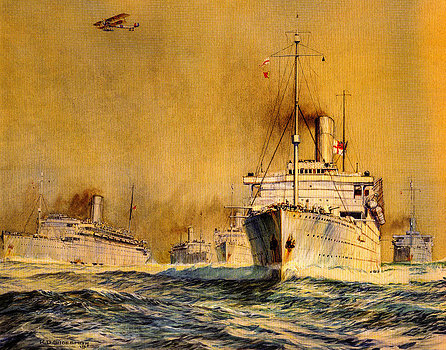 The responsibility for the success of the blockade rested with the Northern Patrol and the Armed Merchant Cruisers of the 10th Cruiser Squadron, which replaced an ageing fleet of Royal Navy Edgar Class Cruisers that had proven to be unsuited to the harsh conditions of the North Atlantic.... 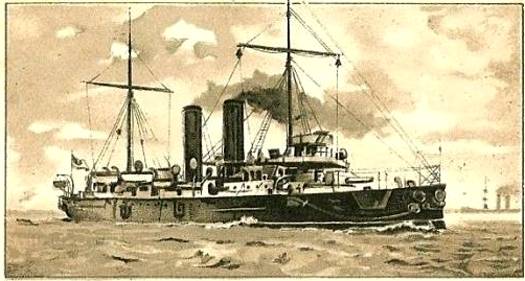 P&O's ss India joined the 10th Cruiser Squadron on 30th April 1915 after conversion at Silley Weir's Wharf, London. She was the largest ship built for P&O at the time, and the first of five sister ships - the others being Persia, China, Egypt and Arabia.

Of the six ships that comprised the squadron in 1915, she suffered the great misfortune of being an early casualty. The first of the P&O ships to be lost, and with great loss of life........ 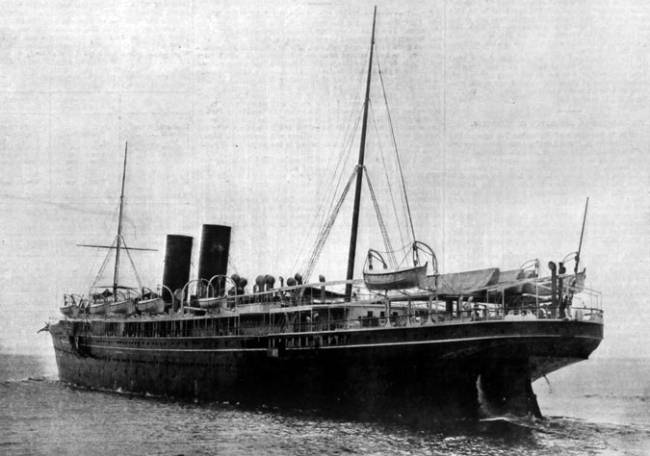 Built by Caird & Company of Greenock,Scotland, she was launched on 15th April 1896, entering service later that year, and operating on P&O's route between Britain, India and Australia. In 1900 she became the first ship to use P&O's new harbour facilities at Fremantle.

On 8th August 1915, India had stopped to investigate a suspected blockade runner, when she was attacked and sunk by the German submarine U22 off the island of Helligvaer, near Bodo, Norway, with the loss of 10 officers and 150 ratings.  Her surviving 22 officers and 119 men were taken to Narvik by the steamer Gotaland and HM armed trawler Saxon, and there interned for the duration.....

For the full story please click on the link below......

The development of the armed merchant cruiser continued though the First World War and well into World War Two, when P&O's ss Canton, operating as the Armed Merchant Cruiser HMS Canton, epitomised the evolution of the concept.

Requisitioned by the Admiralty on 19th October 1939, for service as an armed merchant cruiser and converted by her builders at Glasgow, she was fitted with eight 6-inch and two 3-inch guns.

In April 1941, she was refitted in New York, and a catapult, crane and two Fairy Seafoxes installed. 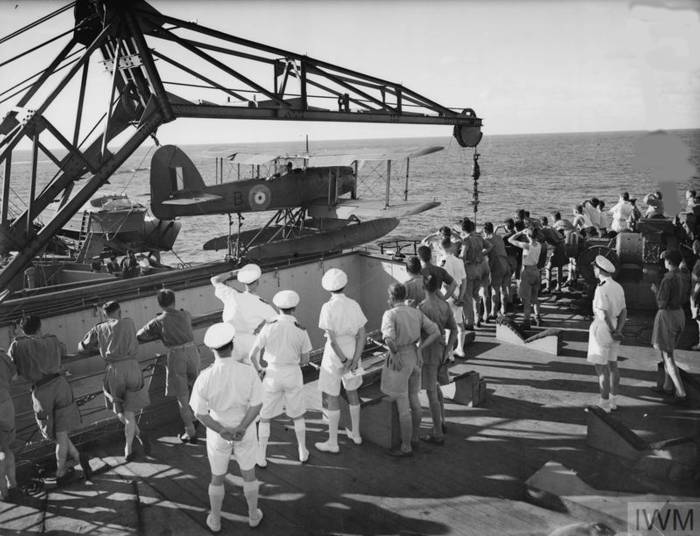 A Fairey Seafox being catapulted from HMS Canton in the Atlantic, on 21st October 1941. Imperial War Museum Photo.

In August 1942 she was refitted on the Clyde, and equipped with a single tripod main mast, mounted forward of a cut down funnel. An extra 6in gun, 2 x 4in guns, oerlikons. and a Kingfisher seaplane were added. She then joined the Eastern Fleet, first at Kilindini and then Colombo. 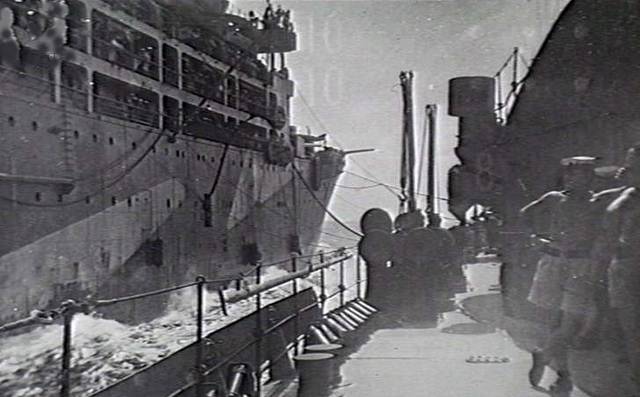 At the outbreak of war she was returned to her builders, for conversion to an Armed Merchant Cruiser and fitted with eight six-inch guns dating from the Great War; four on each side. Above the bridge, on the monkey island, a rangefinder and a primitive gun control system were installed, enabling Canton to fire a broadside of four guns. Later a ninth six-inch gun was fitted on her foc’sle giving her a broadside of five six-inch guns. Her armament was completed by two single barrel three-inch high angle guns mounted abaft the funnel, which was cut down in order to improve anti-aircraft arcs of fire.  Manned by a largely Royal Naval Reserve crew, the majority being serving or former P&O, her only regular RN officers were the commanding officer and second in command.

From May 1940 until early 1941, she was involved in patrol duties in the South Atlantic, occasionally escorting convoys.

Equipped with a seaplane in 1941, it was stowed in what had once been the ship's swimming pool.

On 23rd May 1944, she arrived at Cape Town for conversion to a troopship.

Canton, as reconditioned in August 1947 by Alexander Stephen & Sons Ltd, Glasgow; she was returned to P&O on 28th November.