"The P&O has its own standards, which are higher than the average. It therefore offers to officers in all departments, conditions better than those applied to the industry as a whole. This has been true in bad times as well as in good, and will, we hope, remain true."  From Regulations, Instructions & Advice for Officers of the Peninsular & Oriental Steam Navigation Company ~ c1959. 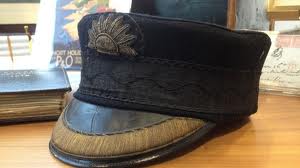 "Junior Officers often started very young in the Company.......the Company preferred to do its own training, where everyone was taught to live under stern discipline....."

Cadets joined the Company at 17-18, from the principal nautical training ships and colleges, indentured to between three and four years service as apprentice deck officers.

"A special advantage of service in the P. & O. Company's employ is the variety of routes and trades upon which the ships are engaged. Perpetually voyaging to and fro across the North Atlantic must become excessively monotonous, while the long haul down to Australia and back without a change, year in and year out, to my mind would be frankly wearisome. I had not been long in the Narkunda when I gained my expected step to Second Officer, being appointed on promotion, according to custom, to a cargo-ship, the Peshawur." Captain D G O Baillie - A Sea Affair

"There was an enormous dignity attached to a liner officer in those days. For instance, in the simple operation of drawing a little circle to mark the ship's noon position on the track chart, I had a Quartermaster to assist me.  He opened the frame and held the dividers for me, and walked discreetly behind me as we wended our way to the First and Second Saloons."

"It would be ungrateful in the last degree not to speak in terms of warm praise of the ship, her officers and the general management of the voyage. None indeed but the most exacting could find anything to complain of.  Its daily and nightly work has been performed with a quiet discipline and precision which could not be surpassed. The company may be proud of such a ship as that in which we sail: for a finer vessel never took to the sea - nor one as all on board agree - better commanded and officered."

"The Company emphasised its difference from others, whether deliberately or not, using terms of its own. Its Captains were always called Commanders." The Story of P&O ~ David & Stephen Howarth 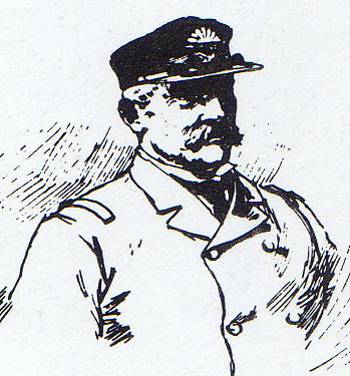 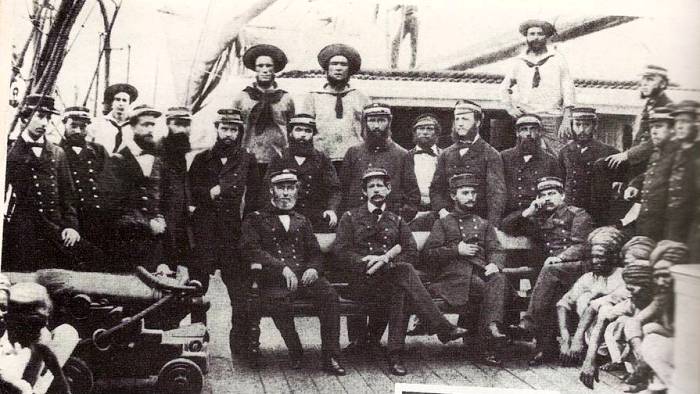 Officers and Crewmen of the ss Benares in 1862, with cannon to deter Chinese pirates 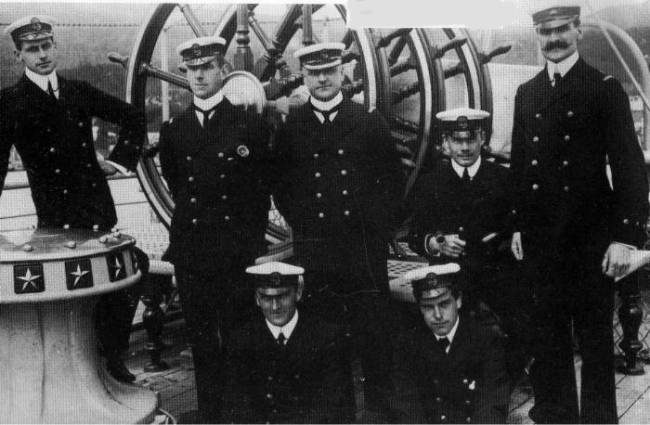 Commander and Officers of the Cruising Yacht Vectis.

Built as The '' in 1881 for the London-Bombay run, she was refitted as P&O's first cruise ship in 1904, carrying 150 passengers on cruises to . Her Officers wear Royal Navy style frock coats, with eight gold buttons, cap badges and rank insignia worn as shoulder straps, as follows:- The Commander with straps of half-inch gold lace on each shoulder and three gold buttons on each of his cuffs; the Chief Officer with a strap of similar gold lace on the right shoulder and three buttons on the cuffs; the Second Officers with just the three cuff buttons and the more Junior Officers, with no shoulder straps or cuff buttons. The gentleman standing on the right in the above photograph is the ship's Purser, wearing a single shoulder strap on his left shoulder, three buttons on the cuffs, and a rising sun cap badge, while the Commander and Deck Officers wear a gold rising sun and anchor on their caps, which saw service until 1972, when a cap badge incorporating the P&O house flag was introduced. 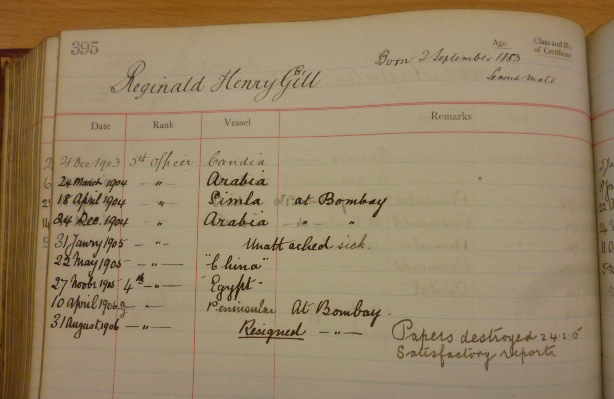 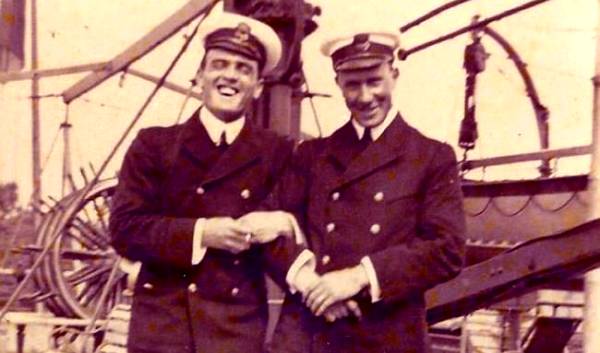 Captain Alexander Nicol Cameron MBE, seen on the left in this photograph, was born on 22nd September 1890 in Aberdeen, the son of Capt John Cameron (Shipmaster). He sailed in the ss Egypt as Senior 2nd Officer in 1921 - before her fatal collision. Leaving the P&O in 1922, to teach at Leith Nautical College, and shortly afterwards became Principal of the Sir John Cass Nautical College in London.  He was awarded his MBE for his technical advice on the building and positioning of the Mulberry Harbours in the Normandy landings of 1944, particularly on Gold, Juno and sword beaches.  He died 24 Aug 1983 in Dartford, Kent aged 92.

P&O rank insignia evolved over several decades, into one where all Deck Officers wore 'fore and aft' shoulder straps denoting their rank:  one gold stripe for the Fourth Officers; two for the Third; two and a half for the Second Officer; three for the Chief Officer and a broad band and a rising sun for the Commander. Caps were Royal Navy style with a rising sun and anchor in gold thread. 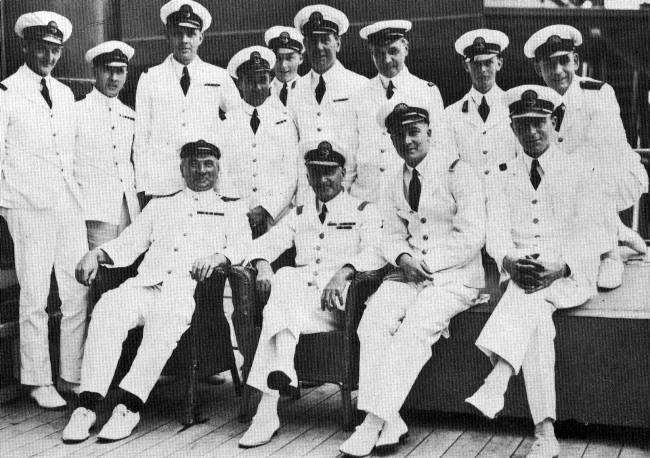 Captain Browning and Officers of the ss Maloja, 1923. The Chief Engineer, seated on the Captain's right, is wearing black socks.

Chief Officer, Petty Officers and Lascars in a break from boat drill on board Strathnaver, 1933.

The duties of officers were as formally defined as the discipline and uniform. The Chief Officer was the principal executive, responsible for the work of the deck crew and carpenters and the cleanliness of the vessel, the masts, sails and rigging, fire pumps and hoses, lifeboats, cargo gear, cables, hawsers, paint and all the marine and carpenters' stores. At sea he was jointly responsible with the Commander for safe navigation. Although in the early days there were several different watch-keeping arrangements according to individual Commanders, it was accepted by the 1880s that the Chief Officer stood the 4.00 to 8.00 watch, morning and evening; in addition, like the Commander, he was required to be alert when the ship approached land or narrow waters.

The Second Officer's special responsibility was the navigational equipment, chronometers - which had to be wound and checked against each other daily - compasses, charts, lead and log; he was also the cargo officer, responsible for preparing stowage plans, and for the cleanliness and order of the holds, and the discharge of cargo at the various ports. He stood the 12.00 to 4.00 watch, afternoon and morning.

The Third Officer, from the early 1870s, held the responsibilities although not the power that in earlier years had been discharged by the Admiralty mail officers. As the quantity of mails increased with every year, so his duties increased beyond anything the old naval agents had known. Here is a description of the formidable task at its in the early twentieth century by a later P & O Commodore, D. G. H. O. Baillie..... 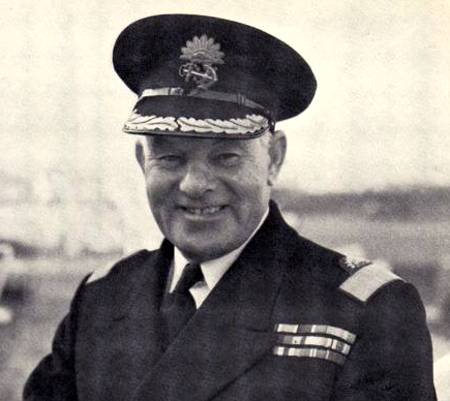 Commodore D.G.Baillie on board ss Himalaya, 1955

"The preliminaries began before the homeward bound mail ship had reached the river, when the mail officer would work out his space and stowage plans for the forthcoming voyage. After making an estimate of the volume of mail he could expect to carry, and the space it would occupy, he had two factors to consider: the number of hatches available for mail and the probable number of bags for each port. These plans, once approved by the Commander, would be forwarded to the GPO, thus enabling the parcel post to arrive alongside the ship in vans labelled not only with the destination but with the number of the hatch in which it was to be stowed. Parcel mails would continue to be loaded into the ship up to an hour or so before the regular Friday sailing." 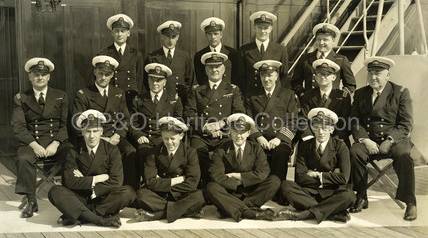 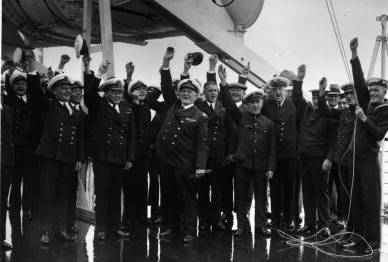 Captain and Officers of the ss Strathmore, anchored off Gourock in 1935, and cheering as the P&O house flag is hoisted for the first time. Photo Sources: P&O Heritage and Getty Images. 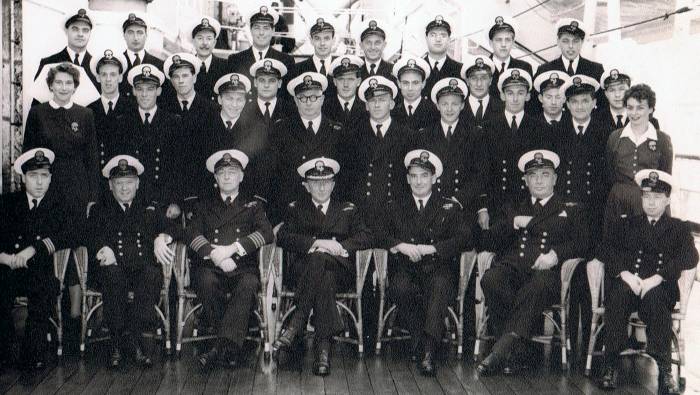 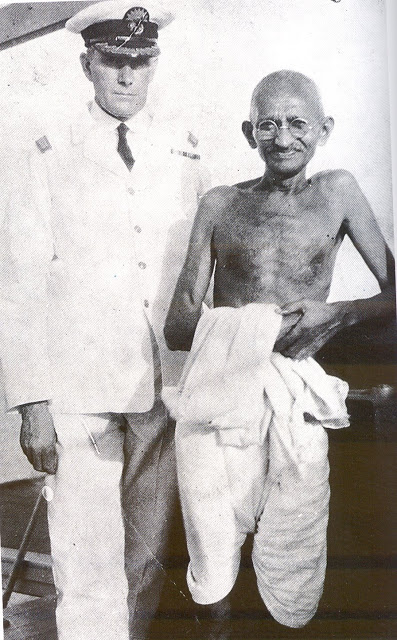 Captain H.M.Jack and Mahatma Ghandi on board SS Rajputana in 1931 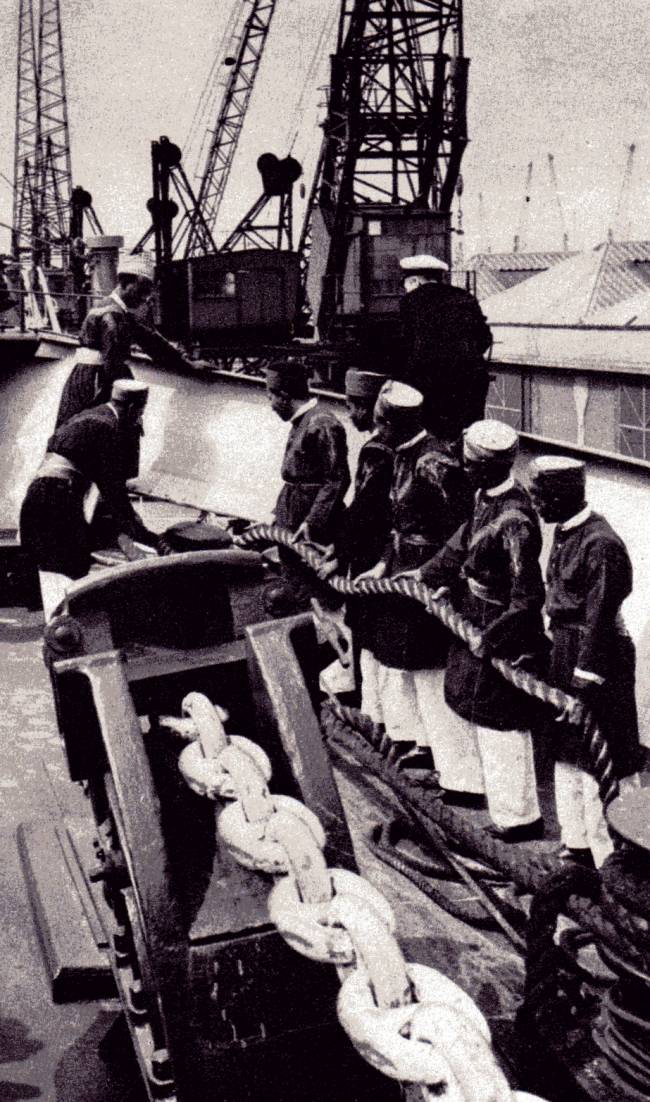 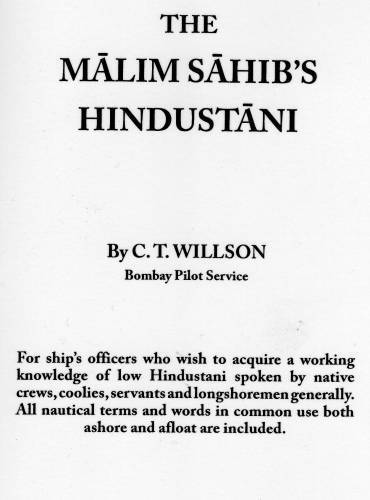 Orders to the Indian crew were given in Hindustani- ‘Bot atcha!’ 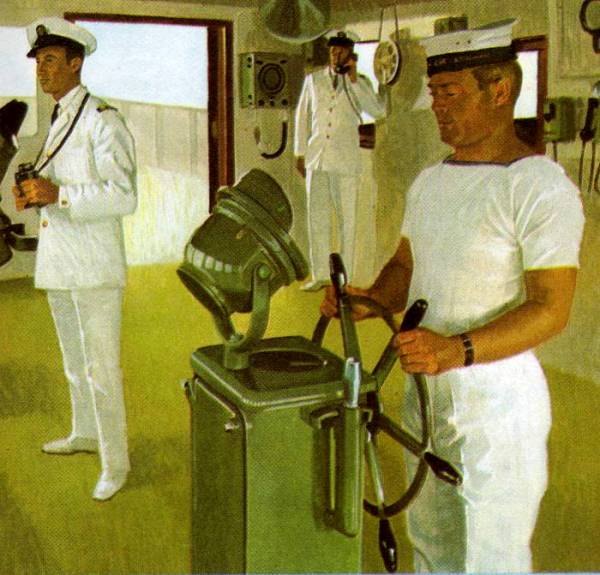 The Dawn of a New Era 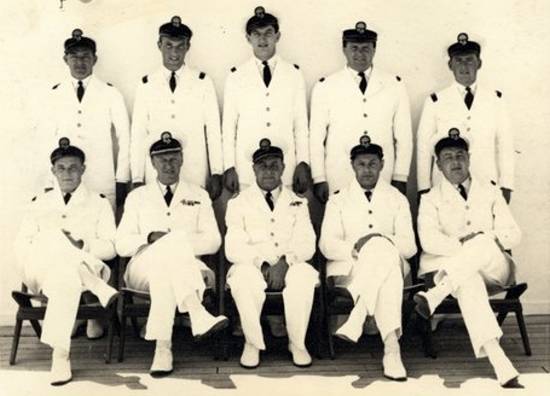 Back row left to right - 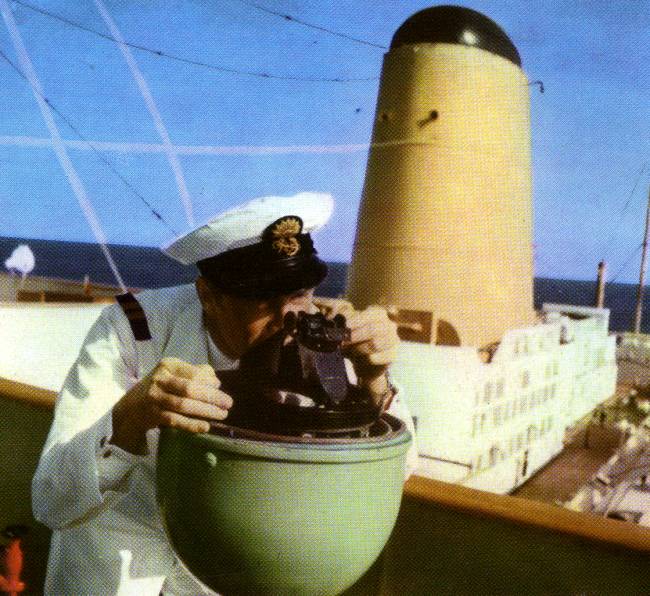 In 1864 it was announced that a British merchant ship would be allowed to fly the plain Blue Ensign providing that the ship's master was an officer of the Royal Naval Reserve and the crew contained a specified number of reservists. Ships were to carry two guns for drill purposes, but this requirement was modified in 1865, and abandoned in 1866. The necessary number of reservists in the crew was one quarter of the crew, increased to one third when guns were made optional and reduced to master plus ten in 1866. Permission to fly the Blue Ensign was in the form of a warrant, issued in the name of the ship by the Registrar General of Seamen, for one voyage only. 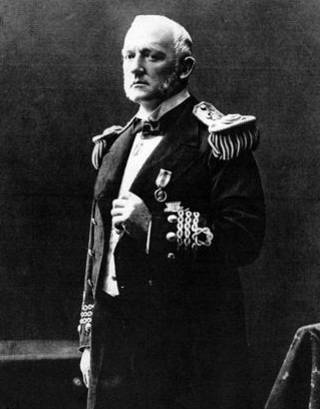 In addition to RN rates of pay while training, or engaged on active service, Officers received a uniform upkeep allowance and a modest  annual, tax-free bounty. 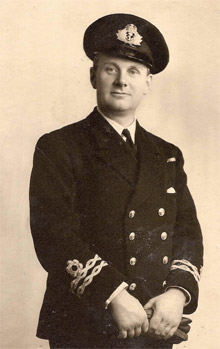 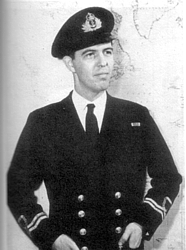 In 1958, the  Royal Naval Reserve merged with Royal Naval Volunteer Reserve and the distinctive RNR and RNVR braid was exchanged for RN-style lace, with a simple 'R' within the curl.

From 1958, List One RNR masters were permitted to fly the Blue Ensign, if just one other officer was in the RNR. 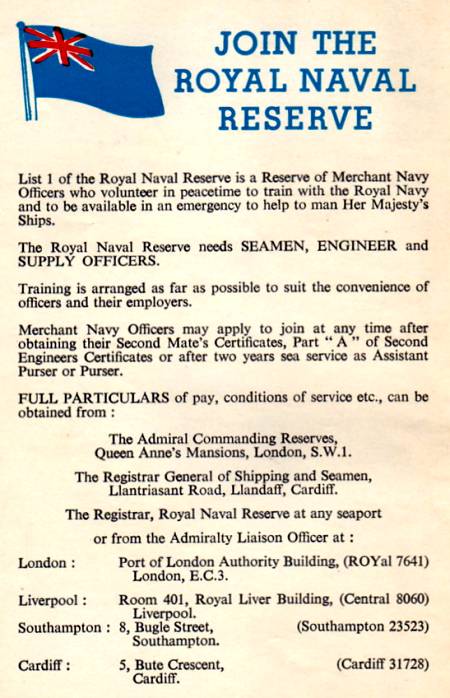 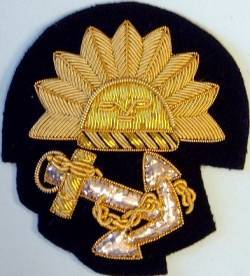