'Is it Tilbury and a tender, or Gallions and the docks?' asked young Dick in Rudyard Kipling’s ‘The Light That Failed’,

a semi-autobiographical story, written when Kipling was 26 years old. 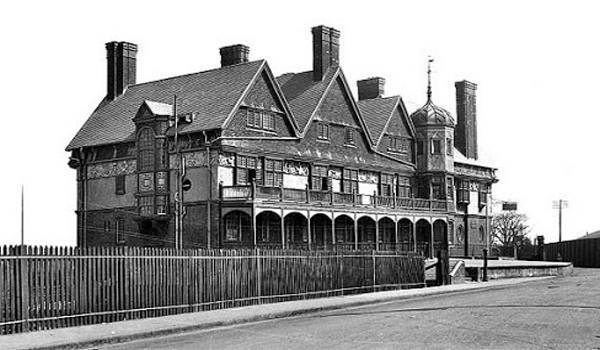 'The interior is solid and Victorian - built to defy time almost - and there is much mahogany in its fittings.'

Ringed by a frieze of busty plaster nymphs by the artist, Edwin Roscoe Mullins, and once known in the locality as 'The Captain's Brothel', the three-storey Gallions, in wasteland overlooking Gallions Reach on the Thames, lay vacant from 1972 until about 2013.

Built on timber piles with stables underneath, the Gallions had a tunnel by which P&O’s Captains and passengers could make their way to the Company’s ships berthed in the Royal Albert Docks, which could then take passengers ships up to 12,000 tons - the largest ships afloat. The Great Eastern Railway ran a passenger service from Fenchurch Street to the hotel, which comprised a ground floor, first floor, and attic. The Gallions had two entrances – one in the basement for workers and another on the ground floor for passengers and Captains.

The premises flourished well into the 1930s, and in 1932, when the hotel was run by Truman's Brewery, the writer and journalist Albert Gravely  Linney (1873-1936) wrote: 'The interior is solid and Victorian - built to defy time almost - and there is much mahogany in its fittings.'

The hotel was erected for the St Katharine's Dock Company in the 1880s, specifically to accommodate Captains and passengers joining P&O ships sailing from the adjacent Royal Albert Dock, and was built by the Ealing firm of Adamson & Sons, to a design by the architect and surveyors, George Vigers and Thomas Wagstaffe.

The Dock Company built and operated a private line from Custom House, on the Great Eastern Railway's North Woolwich Branch, along the north side of the Dock. In its heyday this line was well used, even seeing through-trains for boat passengers from Liverpool Street. In the 20th Century however, the line suffered from competition from road transport and the decline in shipping generally. It closed after the mass bombing of the Docks on 7th September 1940 - the first day of the aerial bombardment of London during the Blitz, and a day still referred to locally as 'Black Saturday'.

No trace of the railway line exists today, although the Docklands Light Railway between Custom House and Cyprus follows its approximate course.

When the Docklands Corporation acquired the Gallions from the Port of London Authority, tiles had been stripped from the roof, and the windows shuttered with rusting corrugated iron. Only the tall chimneys with their hand-cut mouldings and the dormers and gables for the overhanging top floor remained unscathed. The port authority had tried to interest brewers, but without success due to the building's remoteness. 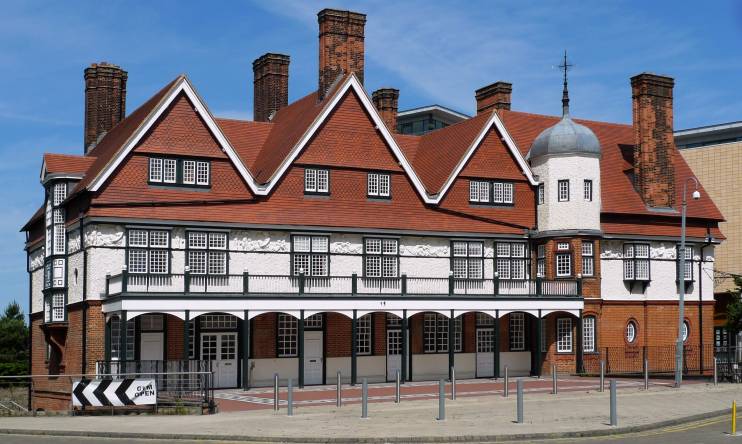 After standing empty for many years, Gallions Hotel has now been thoroughly renovated as part of a deal that has allowed it to be engulfed by upmarket apartment blocks. A ‘bar and kitchen’ called The Reach opened in the hotel building in 2013. The hotel is now, somewhat pretentiously, called Galyons. 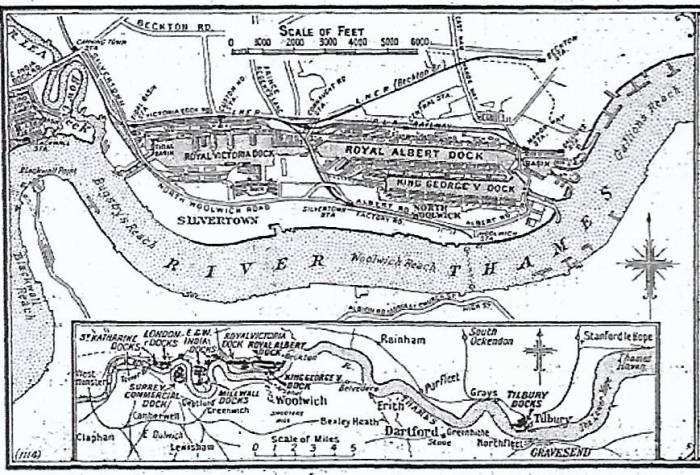 The Port of London Docks Used by The P&O - Source: The Times Archive 7th September 1937

In April 1879, the London & St.Katharine Dock Company received royal assent to name their massive new basin 'The Royal Albert Dock' after the Queen’s late consort, His Royal Highness The Prince Albert, with its older, smaller sister renamed as the Royal Victoria Dock.

When the Royal Albert Dock opened to shipping in 1880, it was considered to be the finest dock system in the world.

Originally planned as an extension of the Royal Victoria Dock, to cope with the successful meat and tobacco trade, it was even larger than the Victoria, with over 3 miles of quay, and an entrance to the River Thames down river at Gallions Reach.

The Royal Albert was true Victorian state-of-the-art : the first London dock to be lit by electricity, with lamps on eighty feet tall poles, allowing round-the-clock working. The cranes were hydraulically-powered. Railway lines ran alongside each quay allowing cargoes to be directly loaded into wagons. The tracks ran into the company’s sheds where they sank below the floor surface, allowing goods to be easily unloaded. 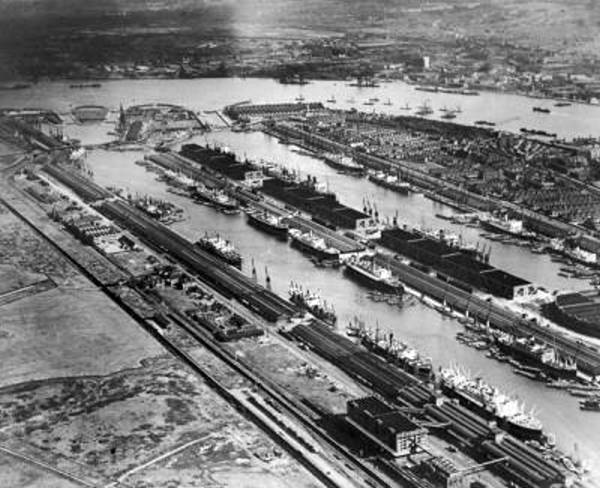 The Royal Albert Dock with the smaller King George V Dock beyond.

The quays were lined with hydrants to provide berthed vessels with fresh water. Ships could be repaired in either of the two dry docks on the western edge of the south quay. By then international travel was increasing for the general public and a passenger terminus was established adjacent to the dock, together with the Gallions Hotel. 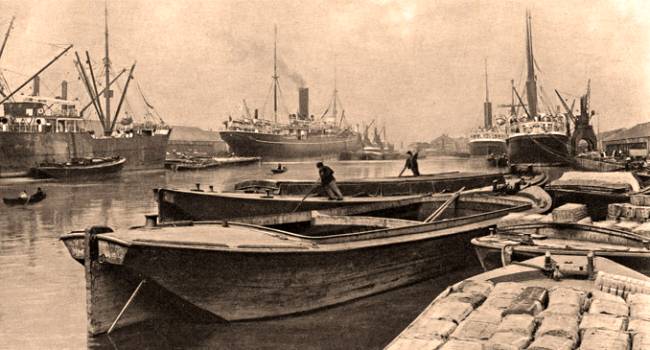 The Royal Albert Dock was designed to accommodate the largest vessels afloat in 1880. 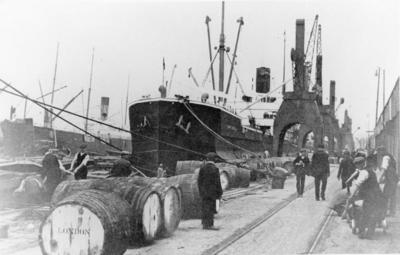 This was increased after a second entrance was constructed, and the dock was able to handle vessels of up to 12,000 tons. Although the dock was originally built to berth sailing vessels, the presence of hydraulic cranes and steam winches enabled a smooth transition to the large steam vessels used to transport passengers and goods.

The Royal Albert Dock was also used as a terminus by passengers ships of the P&O, New Zealand Shipping Company, Shaw Saville and many others. The Great Eastern Railway ran a passenger service from Fenchurch Street to Gallions, adjacent to the dock basin.

The first raids came towards the end of the afternoon, and were concentrated on the densely populated East End, along the river by London's docks.

"About 300 German bombers attacked the city for over an hour and a half. The entire docklands area seemed to be ablaze as hundreds of fires lit up the sky."

The Royal Docks and its surroundings suffered immense damage and loss of life........

Those who lived there suffered particularly badly. Their houses were already in a bad state of repair and were more easily destroyed by bombs.

Between September 1940 and May 1941, 1.4 million Londoners were bombed out of their homes. 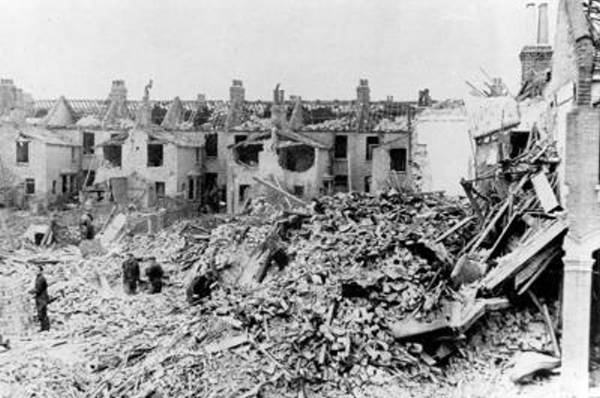 In the south of the borough, near the docks, the figure was much worse, with 85% of the houses destroyed. 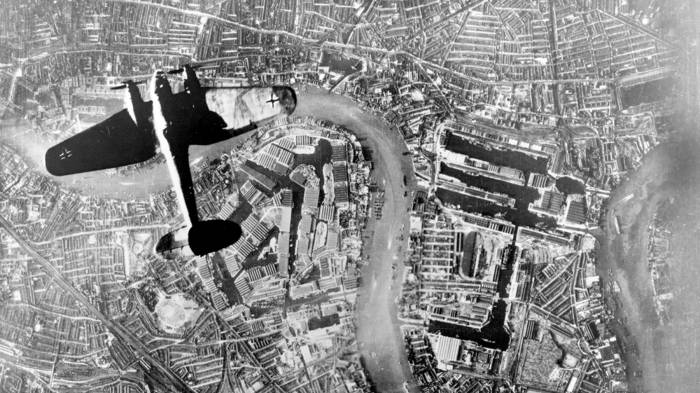 A German Heinkel He111 bomber flying over Wapping and the Isle of Dogs. The Royal Docks Team Photo

The port of London was the most heavily bombed civilian target on mainland Britain.

The Luftwaffe believed that destroying the port with its extensive warehouses, transtit sheds, factories and utilities would disrupt Britain's war effort and totally demoralise the local East End population. It is estimated that some 25,000 tons of ordnance, HE, incendary and land mines fell on the docklands, with the majority on the Royal Docks, and its surrounding area. Human losses were extremely high, but in spite of this sustained bombardment, and thanks to the plucky East-Enders, the Royal Docks remained open. With so much damage, coupled with the Nazi U-boat campaign, the docks did handle fewer ships, but their contribution to the overall war effort was immense.

Almost 43,000 civilians died during the Blitz. Almost 140,000 more were injured, and more than a million homes were damaged or destroyed.

Towards the end of the war, the Royal Docks played a vital role in the construction of concrete caissons for Mulberry Harbours, destined for the D-Day beaches. 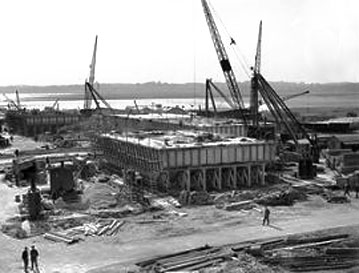 Once completed, they were towed down river and convoyed across to the Normandy beachhead.

Come 1945, hundreds of acres of Docklands were cleared of bomb damage, and prefab construction got underway.

The engineer John Alexander Brodie was at the forefront of promoting precast reinforced concrete as a building material that could produce temporary houses quickly and cheaply. 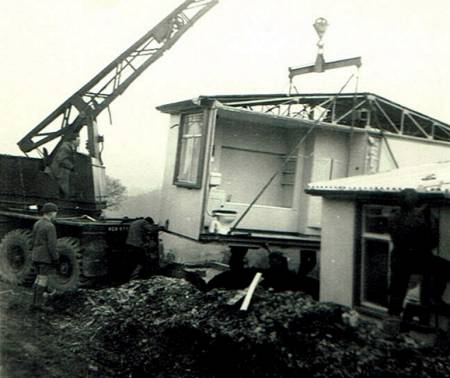 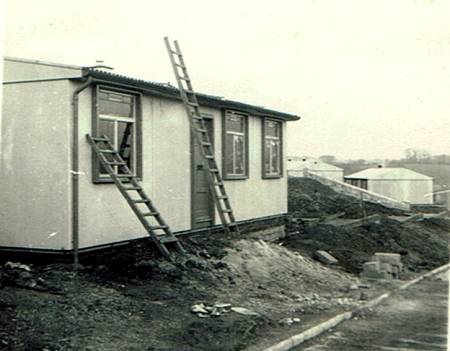 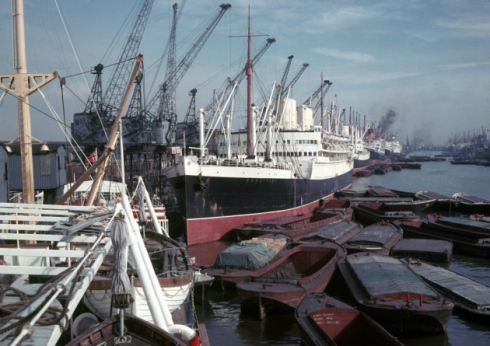 Despite extensive bomb damage, the Royal Docks enjoyed a brief post war boom in trade and for a while it looked as though the docks would continue to thrive through to the end of the twentieth century. But it was not to be....... 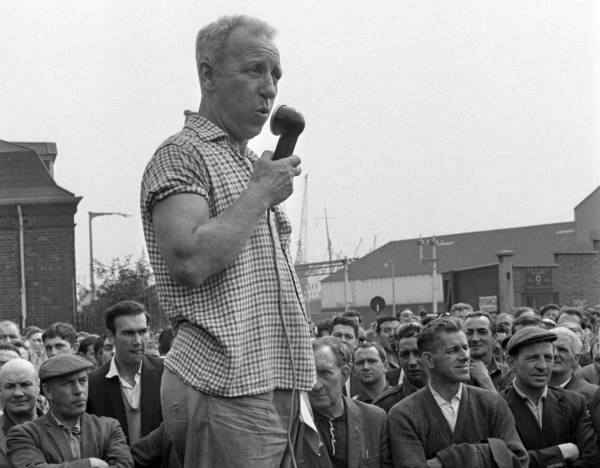 Union unrest was rife and shipowners and shippers were becoming increasingly frustrated with unofficial militancy, led by the charismatic communist dock workers union leader, Jack Dash. Ships were frequently held up, with cargo piled on the quayside, unable to be loaded, the ships unable to sail. 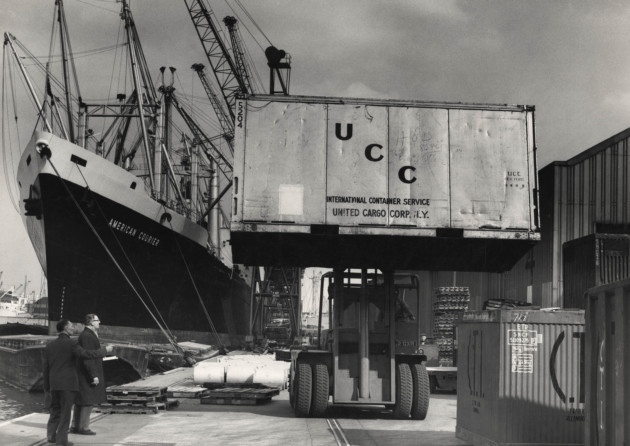 Trials were already being carried out with containers, twenty-foot steel boxes which arrived at the dockside fully loaded and sealed.

Cotainerisation had arrived, and with it, large specialised ships - each one with the cargo capacity of up to eight conventional break-bulk cargo ships.

To service the new breed of cargo ship, container ports were built at Tilbury, Felixtowe, Southampton and Liverpool, with ships now being measured in TEUs -Twenty Foot Equivalent Units - instead of Gross Tonnage.

Container gantries and straddle carriers replaced traditional cranes and trucks, with computerised cargo stowage the order of the day.

With the coming of the container ships, the Royal Docks share of trade rapidly declined, eventually closing to all general cargo in late 1981.

The last vessel to be loaded in the Royal Docks sailed from the King George V Dock on 7th October 1981 - and the last ship to be unloaded there, discharged its cargo just three weeks later. 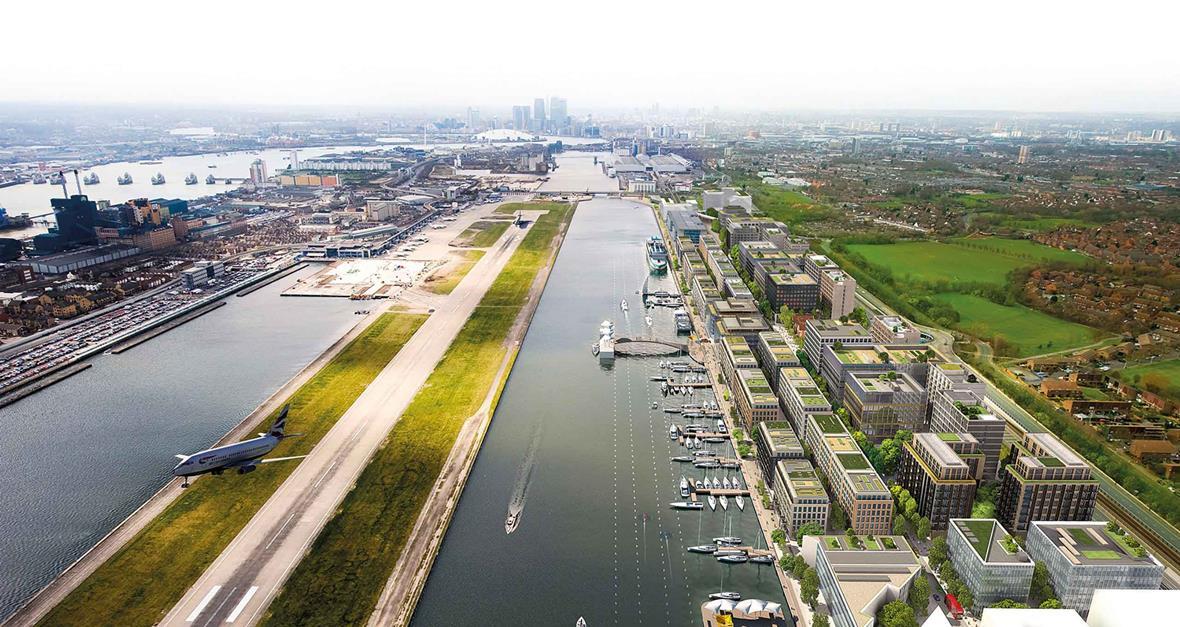 The Royal Albert Dock today, with KGV to the left and the Royal Victoria Dock beyond.