The Imperial Indian Mail was inaugurated in 1926 by the East Indian Railway (EIR) and the Grand Indian Peninsular Railway (GIPR) between Bombay (Victoria Terminus) and Howrah (for Calcutta). It was one of the most luxurious services of its time from Bombay to Calcutta. The train left Bombay every Friday with passengers and mail from Britain, fresh from the P&O steamer. Facilities for passengers could be compared to the best in the world. 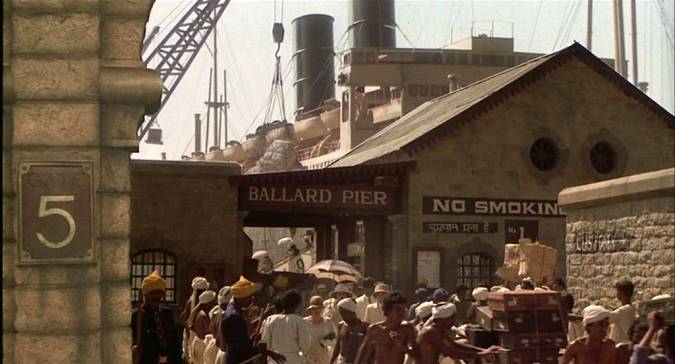 Still from David Lean's movie, 'A Passage to India', with P&O's Moldavia or Mooltan

H class 4-6-0 locomotive No. 511, pulls out of Ballard Pier Railway Station, with Mooltan alongside.

The train at Bombay's Ballard Pier Mole Station connected with the P&O steamships from Britain. In the days of the British Raj, this station was a major hub on the GIPR for the British officials arriving from Britain for postings in colonial British India. From there they could board connecting trains to New Delhi, the Punjab and Calcutta. 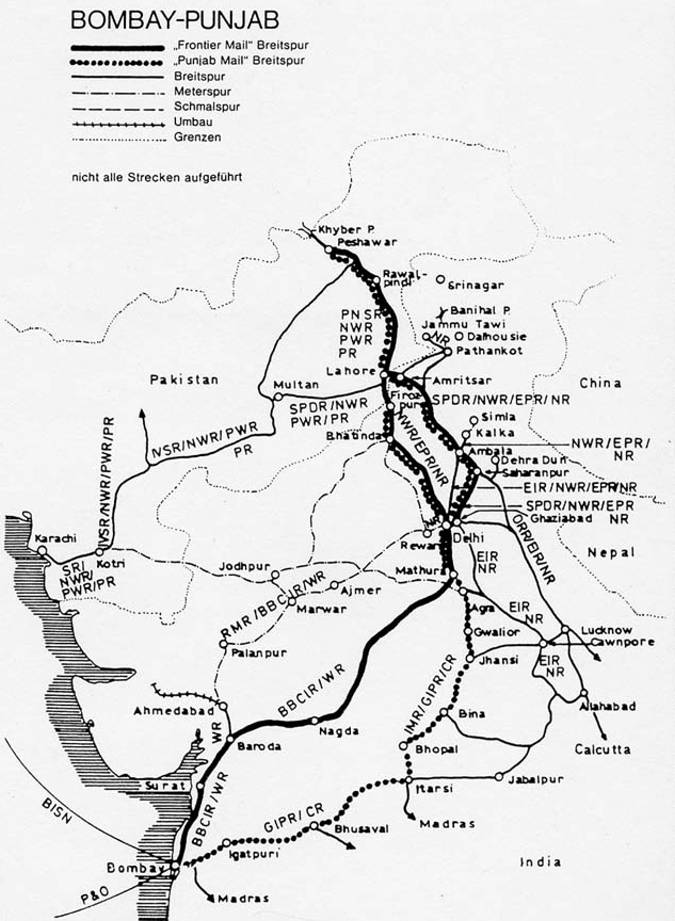 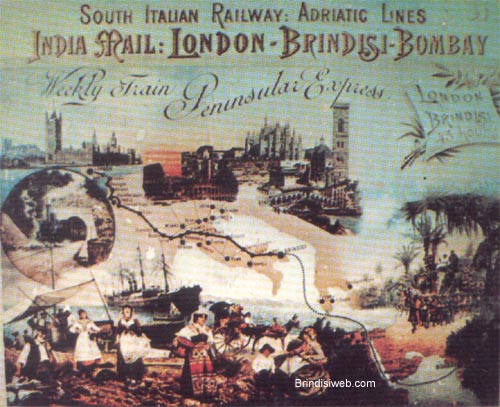 With the opening of the Suez Canal, Brindisi was chosen by the Peninsular and Oriental Steam Navigation Company as the terminus port for the ship of the biggest european navigation company of the last century. From 1871 to 1914 the Indian Mail Route had a stop in Brindisi and became exclusively a rail-maritime line: from London to Brindisi passengers and cargoes travelled by train, then ships sailed from Brindisi every Sunday at 2 p.m. to Port Said, Bombay and Calcutta. 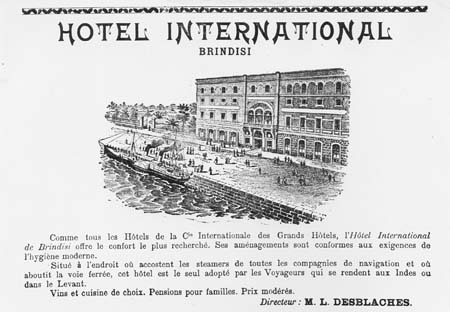 To satisfy the needs of the travellers,  a 'Hotel of the East Indies' - today the Hotel International- was inaugurated in 1870 - one of the most renowned hotels in the Mediterranean. 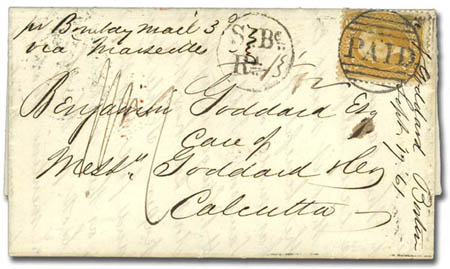 In early November 1870, the Aden Postmaster issued a Postal Notice stating that owing to the Franco-Prussian War, the Marseilles route for mails for England was about to be discontinued until further notice but that letters could still be sent either via Brindisi or Southampton. The inference from this Notice is that the Brindisi route was already an alternative to Marseilles and that it was not introduced when that route was temporarily shut down. But once operating from Brindisi, P & O mail ships used that port from then on.
In 1914, the stop-off in Brindisi was switched back to Marseilles, as the French port was not exposed to the dangers of war - as Brindisi was. 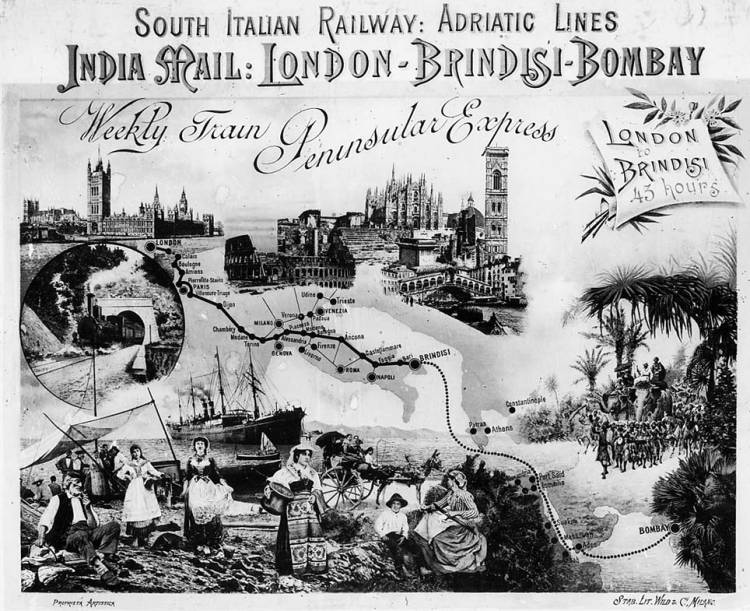 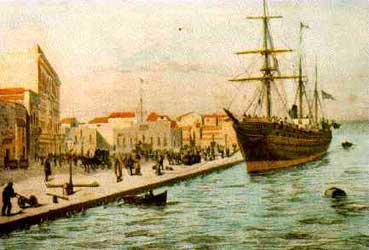 From 1889 a broad gauge line, which then became a part of the GIPR, connected Bombay with Delhi. A competitor became the BBCIR in 1909 on a shorter way via Baroda. From 1912 Delhi was the capital of India and in the same year BBCIR started an exclusive P&O special Bombay - Delhi - Peshawar. The competing GIPR's answer was another "postal" special. In 1927 both companies introduced new train sets and the "race to Delhi" started. The P&O Punjab Express of the GIPR was victorious, while the Punjab Limited Express of the GIPR had to be closed down due to unsustainable losses. 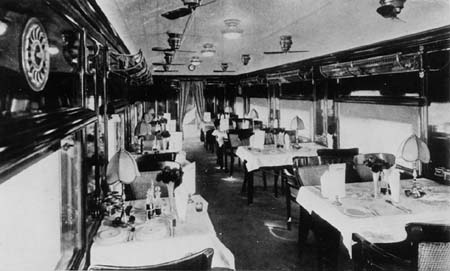 "I have, in childhood, travelled many a time in First Class, where we had an open steel trunk with a huge slab of ice in it, kept bang in the middle of our four-seater compartment. Believe me, with the fans swirling the air around, it blows over the ice and cools the cabin remarkably well!
Also, that ice block with chilled water collecting in the container used to be excellent for keeping cold drinks and fresh fruit chilled!"

Note: In 1914, a P&O mail steamer left London Tilbury every Friday - either for Bombay or for Fremantle - Adelaide - Melbourne and Sydney. Passengers using the Bombay-Express could leave London 4 days later, while those taking the Peninsular Express and the Brindisi-to-Port Said steamer, left London 7 days later. The P&O liners called at Gibraltar, Marseilles, Port Said, Aden and arrived at Bombay on Friday, three weeks after departure Tilbury. From Bombay, there was a connecting P&O liner service to Penang - Singapore - Hong Kong and Shanghai, and an additional service from Tilbury via Malta to Calcutta, alternating with a Yokohama service.  The British India Line connected London with Colombo, Madras, Calcutta as well as East African ports. During the First World War, many P&O ships were used for military purposes and British India steamers took their place. In 1914 the Marseilles mail route was interrupted and the inefficient Brindisi route was closed down for ever. In December 1915 the P&O steamer Persia was sunk in the Mediterranean, by an Austrian submarine and the series of tragedies continued. Nevertheless the connecting de-luxe train Bombay-Express Boulogne - Marseilles Arenc did run from November 1915 until 1917. With the end of the war, the mail route through France was re-opened on 2nd January 1919.