P&O were among the first of the shipping companies changing from paddle to screw and the first of their new ships, the Shanghai, entered service in 1851. She was followed three years later by the 3,438-ton Himalaya. With all the campaigns and wars which were to follow during the next hundred years or so, the trooping service assumed increasing importance and although, on occasion, naval ships were used as troop transports, chartered merchant ships always formed the backbone of the service. While ships constructed primarily for the transport of troops continued to be built up to 1957, even their role ceased in 1962 when it was decided that all future trooping would be carried out by aircraft. 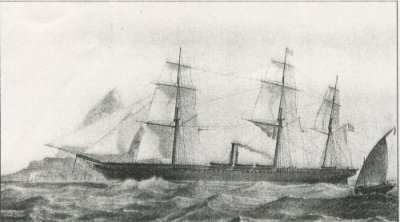 P&O's 3,438grt Himalaya was the company's second screw-driven ship.  With the outbreak of the Crimean War, she was sold to the navy for £130,000 and converted into a naval transport. (Laurence Dunn Collection)

The outbreak of the Crimean War in 1854 resulted in the British Government having to organise their first large scale movement of troops overseas since the introduction of steam.  Twelve P&O ships were commandeered as transports and during the Crimean campaign the company carried over 60,000 troops, together with thousands of horses and a large quantity of naval stores. 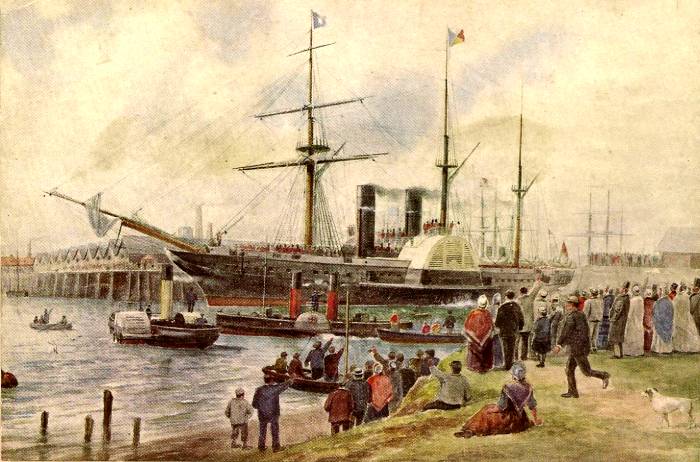 The ss Ripon, built for P&O in 1846, leaving Southampton in 1854 with the Grenadier Guards embarked.

The Indian Mutiny of 1857 inflicted a major strain on the trooping transport service as there were few steamers with sufficient bunker capacity to carry troops round the Cape and into the Indian Ocean.  P&O, however, took up the challenge and shortly after the outbreak of the trouble managed to transport 6,000 troops to India in a remarkably short time. In 1856 the Calcutta and Burmah Steam Navigation Company was formed and later, as the British Indian Steam Navigation Company, was destined to become the third of the great troopship lines. During the mutiny one of their early ships, the 500-ton screw steamer Cape of Good Hope, carried the first reinforcements to reach Calcutta from Ceylon in support of the hard pressed British army in India. For almost thirty years these ships maintained the routine Indian trooping service, becoming familiar to generations of British soldiers. In their early years they were better than any other ships on the service, reducing the time on passage by a large margin, but, towards the end of their days they dropped far behind the standards of the contemporary merchantmen and were bitterly criticized. Apart from the Malabar, all were withdrawn in 1894 and in place of the other four ships the Britannia and City of Rome of P&O and the Dilwara of the British India line were taken up on charter. The result was surprisingly successful. Not only did it reduce the cost to the Government but the troops were carried in infinitely more comfortable quarters in these passenger liners. After the opening of the Suez Canal in 1869, the Dacca, one of British India's finest steamships, joined the Indian trooping service despite intense opposition from P&O. From the 1860s to the early part of the twentieth century any sizeable military operation forced the Government to turn to the merchant service. In the Abyssinia military operations of 1868 P&O supplied six troopships and British India nine. These companies also supplied ships for the Ashanti War of 1873 and the Zulu War of 1879. During the Egyptian campaigns of the early 1880s, eight P&O and nine British India ships were chartered.

P&O provided nine ships, with each carrying an average of 5,500 soldiers per year, making a total of almost 150,000 troops moved during the three years of the war. Between 1899 and 1900 P&O built the Assaye, Plassy and Sobraon specially as transports. With a tonnage of 7,400, their triple-expansion engines gave them a speed of 16 knots. So that the troops could parade and exercise, each ship had wide decks clear of obstructions. All were convertible into intermediate passenger liners when they were not required as troopships. 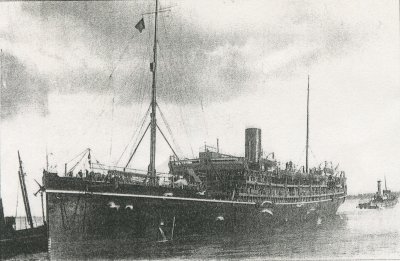 One of three troopships built by P&O between 1988 and 1900, the 7,400grt Assaye had wide decks to enable troops to parade and exercise.  (Laurence Dunn Collection) 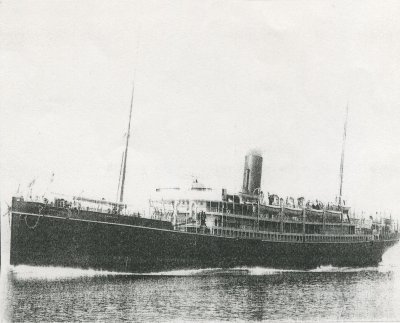 P&O's purpose-built troopships, the Sobraon was completed by Caird & Co at Greenock in 1900.  Also suitable for intermediate service, Sobraon made her maiden voyage to Bombay, but on the homeward voyage with passengers and mail she ran ashore on Tung Yung Island in dense fog.  All passengers and mail were saved, but salvage efforts were abandoned in May 1901 and the ship became a total loss.  (Laurence Dunn Collection) 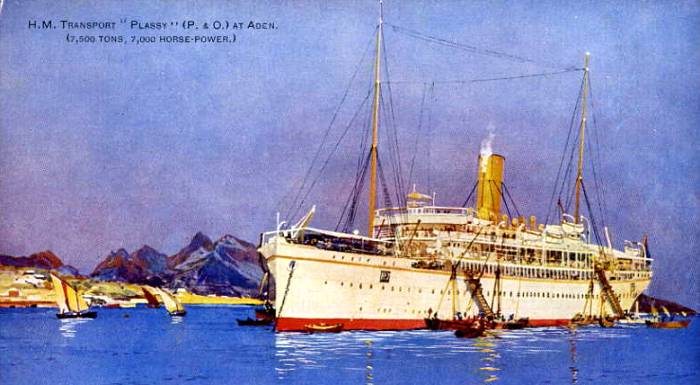 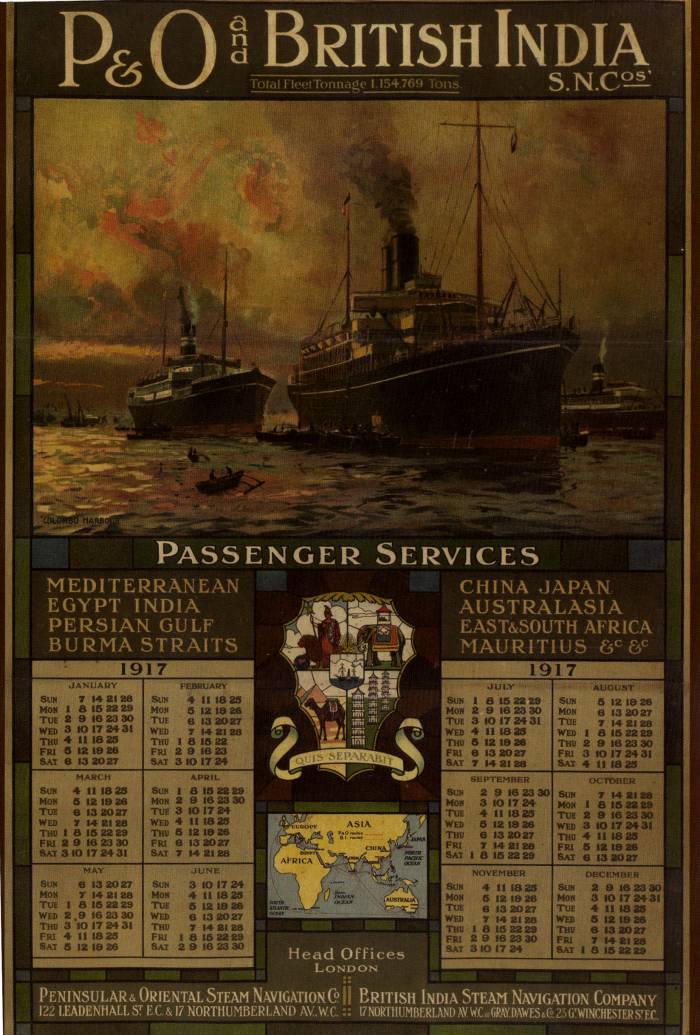 Even before the outbreak of  war the British Government had given English shipping companies the opportunity to arm their merchant vessels with guns. On March 26, 1913, Winston Churchill, then First Lord of the Admiralty, made the declaration to the British Parliament . . . 'that the Admiralty had called upon the shipowners to arm a number of first-class liners for protection against danger menaced in certain cases by fast auxiliary cruisers of other powers; the liners were not, however, to assume the character of auxiliary cruisers themselves. The Government desired to place at the disposal of the shipowners the necessary guns, sufficient ammunition, and suitable personnel for the training of the gun crews.'

By 1914 and the outbreak of war, all that had changed  and passenger liners were requisitioned by the Royal Navy for conversion to Armed Merchant Cruisers - in part to form the 10th Cruiser Squadron, to relieve the strain on the Royal Navy's cruisers by undertaking lone patrols, and later, convoy escort duties. Two P&O liners were requisitioned and converted to this war role. 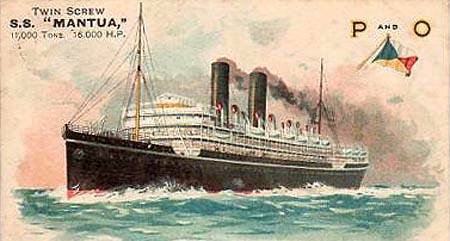 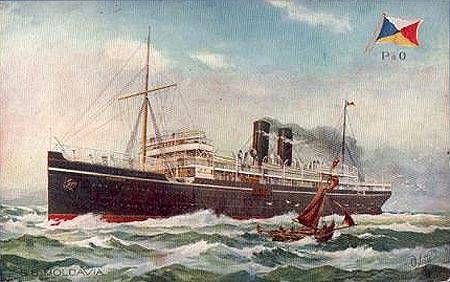 Moldavia - torpedoed by U-boat on 23 May 1918 in English Channel.
The most prominent employment of Armed Merchant Cruisers was in the creation of the 10th Cruiser Squadron, used to maintain the blockade of the North Sea, its patrol area extending from the Norwegian coast far into the Atlantic and covering all approaches to the European continent from a northerly direction. In so doing they relieved twenty or more regular Navy cruisers for other duties. Forty-one different converted passenger ships served with the Squadron for some length of time, each armed with guns of up to 6-inch calibre. The 10th Cruiser Squadron was finally paid off on 7th December, 1917.

"We are recovering… I venture to think that we shall shortly be on the upgrade in shipping generally, and, if so, this great Company will be amongst the leaders in enterprise and in increased prosperity ’ 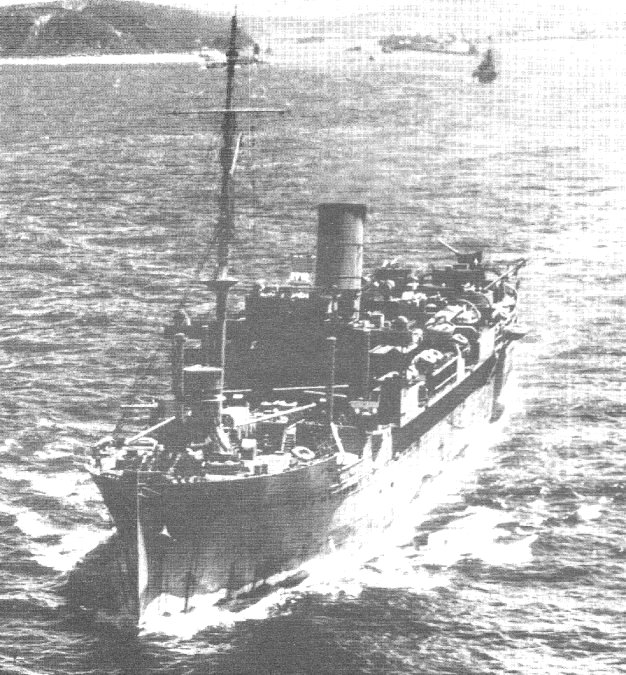 In August 1939 the passenger ship Chitral was requisitioned by the Admiralty and converted to an armed merchant cruiser. Conversion was completed on 4 October 1939. 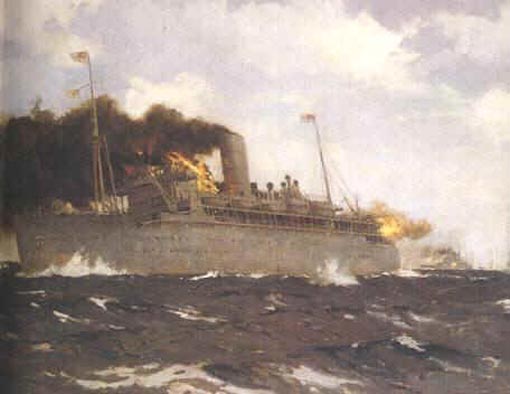 On 26 August 1939 the passenger ship Rawalpindi was requisitioned by the Admiralty and converted to an armed merchant cruiser. Conversion was completed on 19 September 1939. Sunk 23rd November 1939. 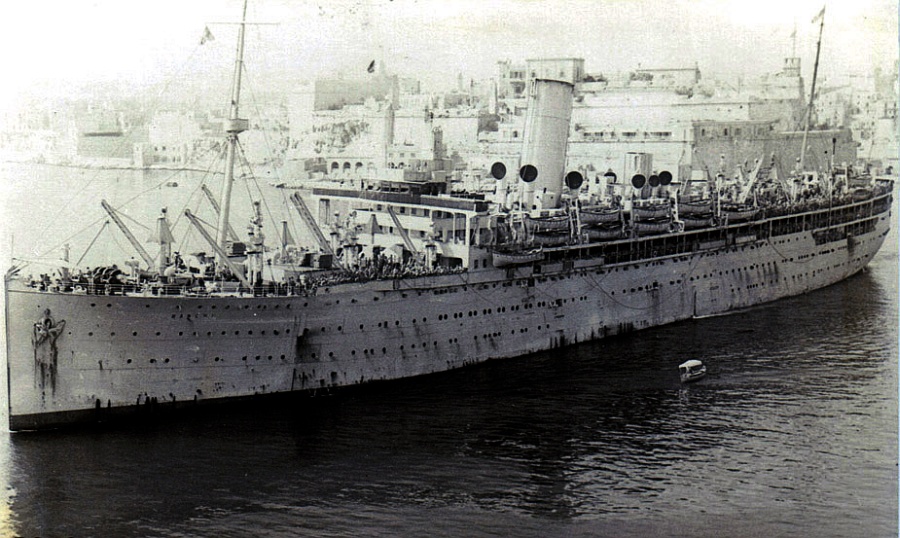 On 27 August 1939 the passenger ship Ranchi was requisitioned by the Admiralty and converted to an armed merchant cruiser. Conversion was completed on 23 October 1939. 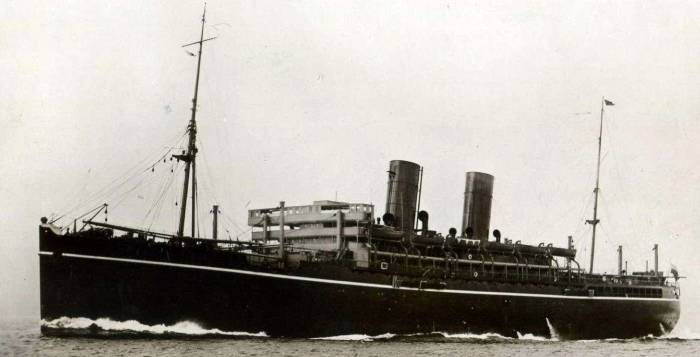 On 5 September 1939 the passenger ship Comorin was requisitioned by the Admiralty and converted to an armed merchant cruiser. Conversion was completed on 30 December 1939. Sunk 6th April 1941 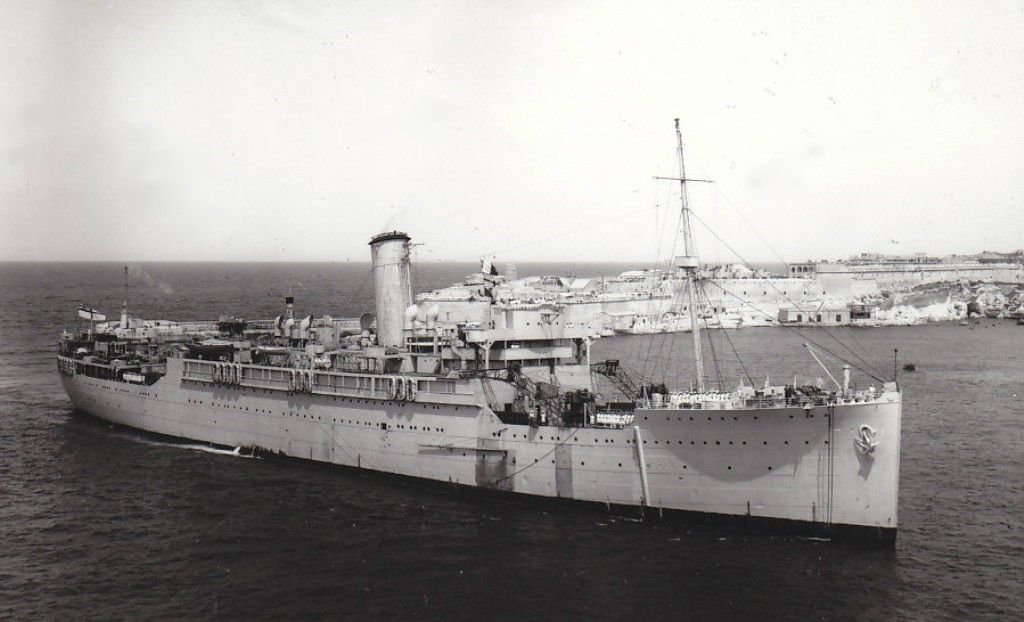 On 6 September 1939 the passenger ship Ranpura was requisitioned by the Admiralty and converted to an armed merchant cruiser. Conversion was completed on 30 November 1939. 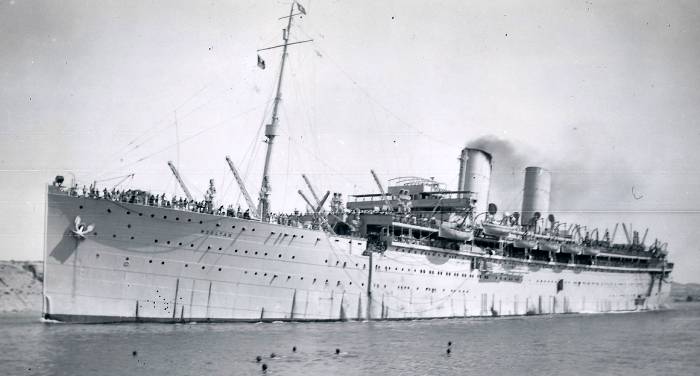 On 9 September 1939 the passenger ship Mooltan was requisitioned by the Admiralty and converted to an armed merchant cruiser. Conversion was completed on 15 October 1939. 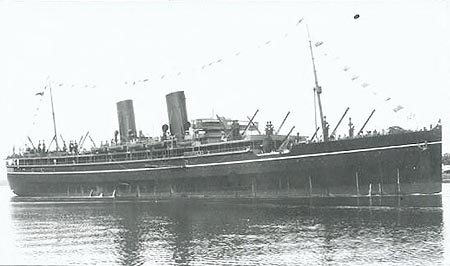 On 11 September 1939 the passenger ship Maloja was requisitioned by the Admiralty and converted to an armed merchant cruiser. Conversion was completed on 24 November 1939. 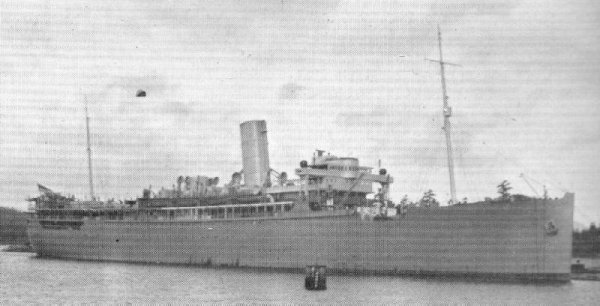 Completed in December 1925 the passenger ship Rajputana was requisitioned on 4 Sep, 1939 and converted to an armed merchant cruiser, commissioned in December 1939. Sunk 13th April 1941. 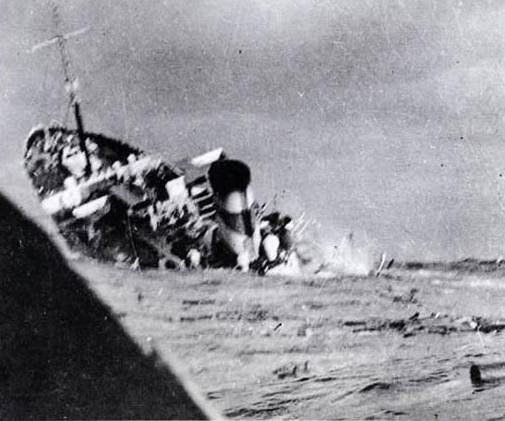 On 19 October 1939 the passenger ship Canton was requisitioned by the Admiralty and converted to an armed merchant cruiser. Conversion was completed on 4 November 1939. HMS Canton was also equipped with an aircraft hanger and a Kingfisher single engine aircraft and an aircraft recovery crane, she was also distinctive as she had been fitted with a tripod mast behind the bridge. 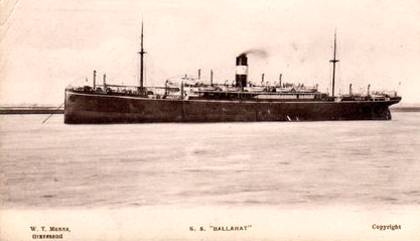 When war came in 1914, P&O Branch Line's ss Ballarat served initially as an Indian transport, carrying Australian troops the following year.  On 25th April 1917 she was torpedoed by the German submarine UB.32, 24 miles S by W of the Wolf Rock. At the time she was sailing as HM Ambulance Transport A70, on a voyage from Melbourne to London with Australian troops and a cargo of copper, antimony ore, bullion and general cargo. Despite 50 lookouts on each side and HMS Phoenix as escort, the torpedo was not spotted. Her starboard screw was smashed and the engine room flooded. Taken in tow by a destroyer and HM Drifter Midge, she sank in 44 fathoms of water 8½ miles off the Lizard the following day. Fortunately, all 1,752 on board were saved. Later, the P&O Chairman, Lord Inchcape, negotiated £420,000 compensation for a ship that had initially cost just £176,109.

The following is from 'Dictionary of Disasters at Sea During the Age of Steam' by C. Hocking:

"The troopship Ballarat, taken over from the P. & O. company, was approaching the entrance to the Channel on April 25th, 1917, when she was torpedoed by a German submarine. Including troops, who were all reinforcements from Victoria for the 2nd and 4th Australian Brigades, there were some 1,750 persons on board at the time. The day being Anzac Day the men were parading for a memorial service on board when, at 2.5 p.m., the torpedo struck the ship. One propeller was smashed, a 6 in. gun destroyed, the main steam pipe fractured and the after watertight bulkhead blown in. The BALLARAT at once began to settle in the water but admirable discipline was maintained and the men, who had been exercised at boat drill repeatedly by the colonel of the Victorian Scottish who was in command of the draft, went to their places in splendid order. There was no loss of life, all the troops and crew being taken off by their own boats or by escorting destroyers. The captain of the Ballarat, Commander G. W. Cockman, DSO, RNR, received the congratulations of the Admiralty on this splendid feat, and the Australian troops were congratulated by King George V. 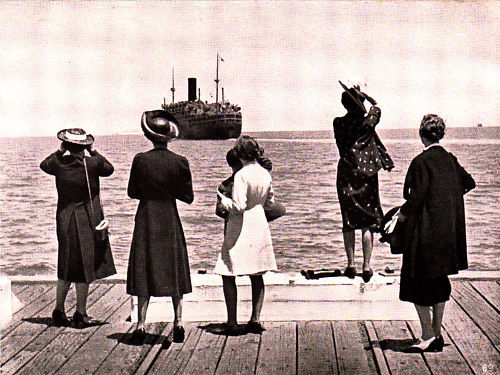 Photographed in Port Philip Bay after leaving Melbourne with the New Zealand & 2/AIF Advance party 6th Division Troops bound for The Middle East.The Newly built 23,722 Ton, P&O Liner Strathallan, launched at Barrow in 1938, was commissioned by the Royal Navy as a Troopship at the outbreak of war. She was torpedoed and sunk by German U-Boat U-562 off the Algerian Coast on December 21st 1942 whilst conveying Troops, Nurses and Some of General Eisenhower's Staff during a voyage from England to North Africa in Operation Torch.