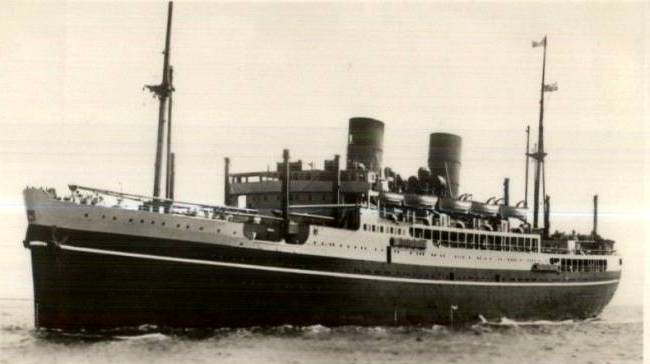 Launched in 1931 to serve the company's India and Far East mail service, Corfu, like Carthage, was built by Alexander Stephen & Sons Ltd in Glasgow, and served from 1931 until 1961 when she was scrapped in Japan.

On 16th October 1931, she sailed from London on her maiden voyage, calling at Southampton before proceeding on to Port Said, Aden, Bombay, Colombo, Penang, Singapore and Hong Kong. 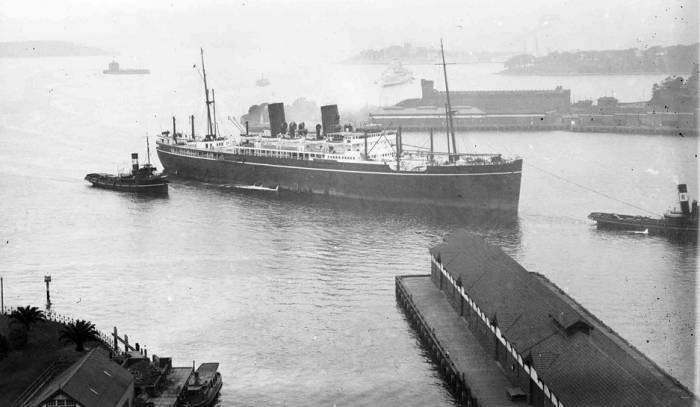 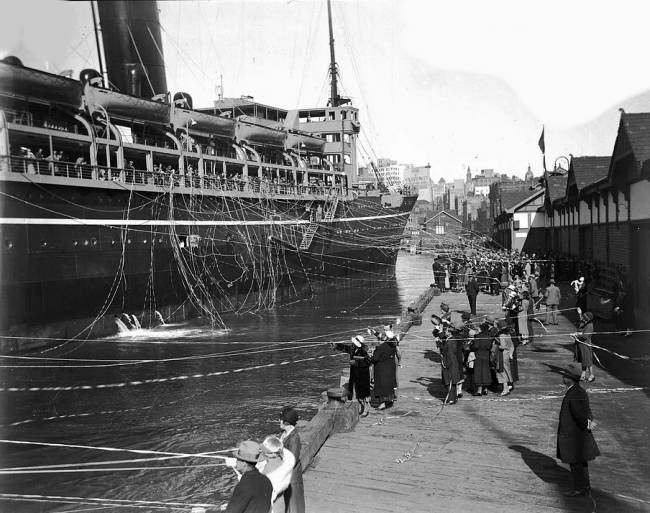 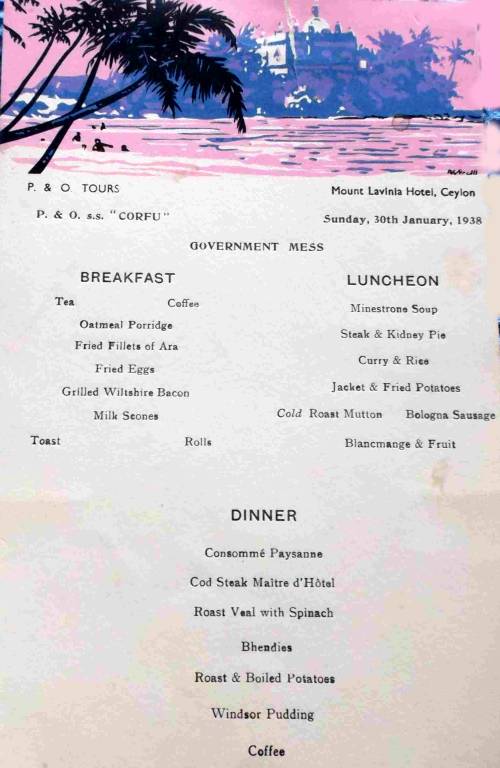 On 14th September 1939, Corfu was requisitioned by the British Admiralty and armed with eight 6-inch guns and two 12-pounders as part of her conversion to an armed merchant cruiser.

Converted at Belfast by Harland & Wolff, she joined the Northern Patrol on 2nd February 1940, and served in this role, in the North and South Atlantic, as HMS Corfu, until February 1944. With her impressive turn of speed, she was able to overhaul and board suspicious vessels with alacrity, and on one memorable day, intercepted and boarded no less than eleven merchant ships - all of which were detained.

On 10th July 1940, the aircraft carrier HMS Hermes collided with Corfu, and badly damaged, the AMC was abandoned - but reboarded later in the day and subsequently taken in tow, stern first, by HMS Milford and the Dutch tug Donau, reaching Freetown, Sierra Leone on 13th July. Hermes had accidentally rammed Corfu during a rainstorm in the dark, resulting in a 9-metre hole in her starboard bow, that penetrated number two hold, which was full of ammunition. The impact injured three of the carrier's crew, one of whom subsequently died of his injuries, but no one from Corfu's crew was injured.

The two ships were locked together in such a way that Corfu's crew could walk from one to the other, when Captain Onslow ordered most of her crew to be evacuated onto Hermes. They were pulled apart by a combination of the carrier's turbines running at full speed astern and pumping out Corfu's ballast tanks to lighten her forward.  She was beached at Freetown on 19th August for initial repairs to her damaged bow, then steamed on to Calcutta, arriving on 7th May for permanent repairs.  Re-entering service again in early 1941, she served on convoy escort duties in the Indian Ocean. 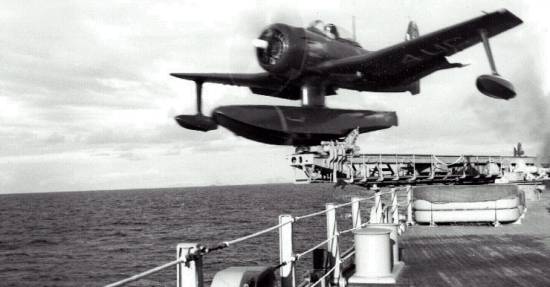 On 17th October 1942, she arrived at Southampton for six-months' re-armament, both there and on the Clyde. Nine new 6-inch guns and other refinements, including a catapult and three Fleet Air Arm Vought Kingfisher reconnaissance seaplanes were installed, prior to a resumption of convoy escort duties in the Indian Ocean.

On 17th February 1944, Corfu was returned to P&O, having been converted to a Troop Transport. 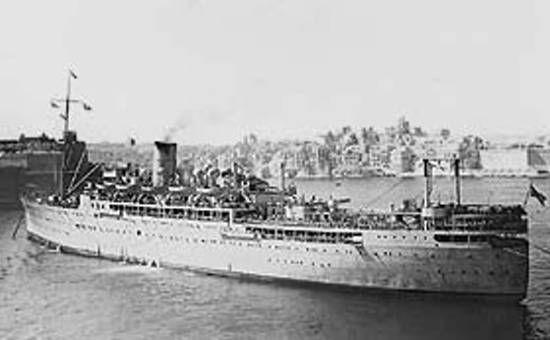 On 2nd September 1945, the armed forces of the Empire of Japan surrendered to the Allies. Five days later, Corfu reached Singapore, where she embarked survivors of the Japanese prisoner of war camps, before moving on to Rangoon where more survivors were embarked.

Changi POW Camp was liberated by troops of the 5th Indian Division on 5 September 1945.

The notorious Changi POW Camp was opened after Singapore's fall on February 15th 1942, and was one of seven main camps on the island for captured British and Commonwealth forces.

The Japanese also crammed some 15,000 men into the Selerang Barracks, which was originally intended for a maximum of 1,200 men.

Women, serving in the armed forces, were recalled from home leave and instructed to meet the ship at Southampton, where they were greeted with amazement by many of the men who had seen very few women in military uniform before leaving for the Far East. After a month at sea, many of the men had recovered sufficiently to walk off the ship - others were carried off on stretchers to the waiting ambulances on the quayside. 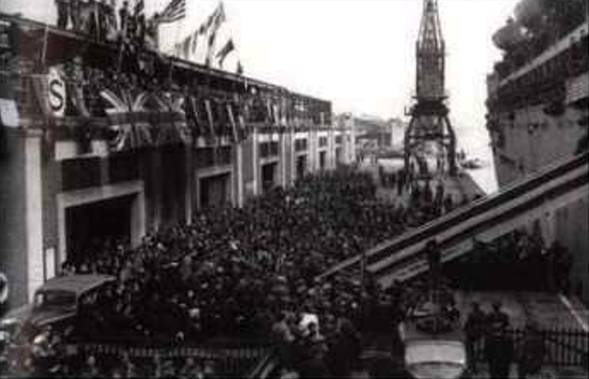 A local newspaper reported: On 8th October the Corfu arrived at Southampton with more than 1500 ex POW’s who held been held by the Japanese. Relatives and the citizens of Southampton gave the men a magnificent welcome. the arrivals comprised men from 50 regiments, also naval personnel, and one member of the RAF. As they went ashore they were given a welcome home message from the King and Queen, a bar of chocolate, 20 cigarettes, and a quantity of fruit. Enormous crowds cheered as they filed down the gangway many carrying presents for relatives and toys for children— and were motored to camp, where parents, wives, and sweethearts were admitted. The men looked pale and thin, but were in the highest spirits. 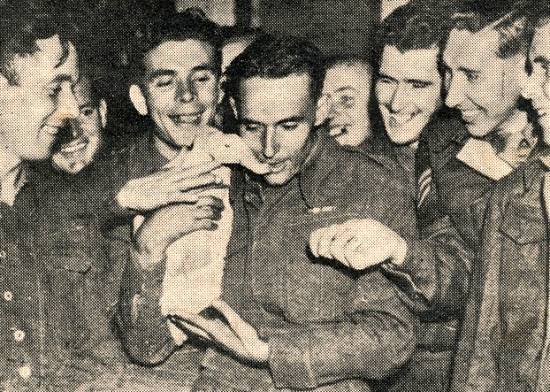 Donald the Duck kept as a pet by POWs -and brought home from Rangoon.

37,583 prisoners from the United Kingdom were released after the surrender of Japan - but more than 30,000 had died from starvation, diseases, and mistreatment, both overseas and on the Japanese mainland.

Note: The Empire of Japan, (which had never signed the Second Geneva Convention of 1929, it is, however, important to note that the Japanese Emperor had agreed to its provisions) did not treat prisoners of war in accordance with international agreements, including provisions of the Hague Conventions (1899 and 1907), either during the second Sino-Japanese War or during the Pacific War. Moreover, according to a directive ratified on 5 August 1937 by The Japanese emperor Hirohito, the constraints of the Hague Conventions were explicitly removed from prisoners of war from China, the United States, Australia, Britain, Canada, India, the Netherlands, New Zealand and the Philippines held by the Japanese armed forces  and these POWs were subject to murder, beatings, summary punishment, brutal treatment, forced labour, medical experimentation, starvation rations and poor medical treatment. The most notorious use of forced labour was in the construction of the Burma–Thailand 'Death Railway'.

According to the findings of the Tokyo Tribunal, the death rate of Western prisoners was 27.1%, seven times that of POWs under the Germans and Italians.

The ship had originally been designed to carry 177 First Class and 214 Second Class passengers, so conditions on board when she was transporting thousands of troops, were far from luxurious. 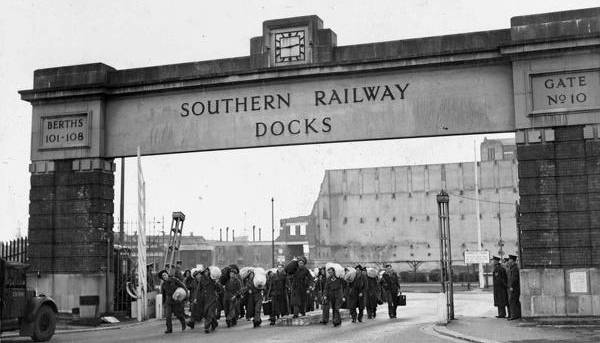 A press report reads: On 8th April 1946, 700 troops walked off the troopship Corfu. The men complained of inadequate accommodation, bad messing arrangements necessitating queuing for two hours, the absence of recreational facilities, shortage of washing and lavatory space, insanitation, a shortage of blankets, which meant that some had none last night, and no pay or leave in the transit camp at Southampton for a week before embarkation. 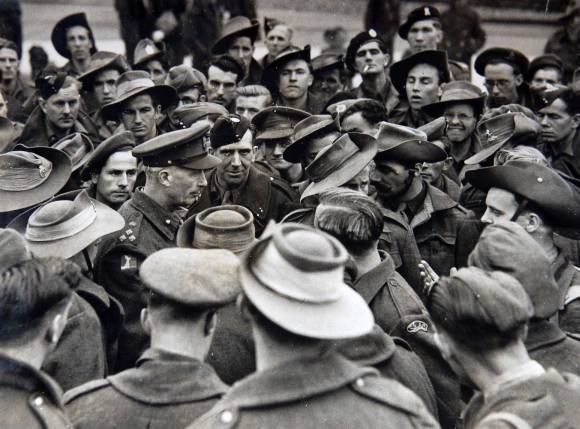 After a wharf appeal by the brigadier for an orderly presentation of their complaints, three NCO's accompanied him aboard. The brigadier, after returning from an inspection of the ship to the quayside, told the men that the Corfu was 350 short of its maximum capacity, the number of lavatories was up to scale, and there would be few messing difficulties after the men had settled down aboard. He said that he was unable to alter the arrangements, whereby men for the Far East would be on the lower deck, because of disembarkation requirements for men going to the Near East and Middle East. He said that he would arrange for a pay parade, and extra blankets and a pillow would be issued to each man. When the brigadier tried to continue his address, his voice was drowned by catcalls and shouts from the men. After the Brigadier had addressed them, the men took off their baggage and made their way to the transit camp. An embarkation staff officer told the Press Association: — 'The Corfu has been reconditioned, and is practically a new ship’. About 400 men returned to the Corfu and the remainder were marched to the army transit camp and detained. Also current at the time were reports of overcrowding and unsanitary conditions experienced by troops arriving at Southampton on the recently arrived Orient liner Orion.

The army decided to place 303 of the protesting soldiers on board the Union Castle line's Durban Castle on 14th April except for 44 who were confined and charged by the RMP with indiscipline. The War Office put out a statement that the conditions on the Corfu and the Orion had been greatly exaggerated.

The Secretary for War J.J. [Jack] Lawson MP in the Attlee government ordered an Inquiry into the complaints.

A Court Martial was held of NCO’s involved in the protest and on 15th June the War Office issued a statement:  'A sentence of reduction to the ranks was promulgated against nine army non commissioned officers who were charged with deserting from the troopship Corfu at Southampton on April 8, with intent to avoid sailing'.

On 31st July 1947, after a major refit carried out by her builders at Glasgow, and with her new Company livery of white hull and buff funnel, Corfu resumed her regular service with P&O to the Far East, continuing until the late 1950’s, when she undertook short cruises until the 24th. March 1961. 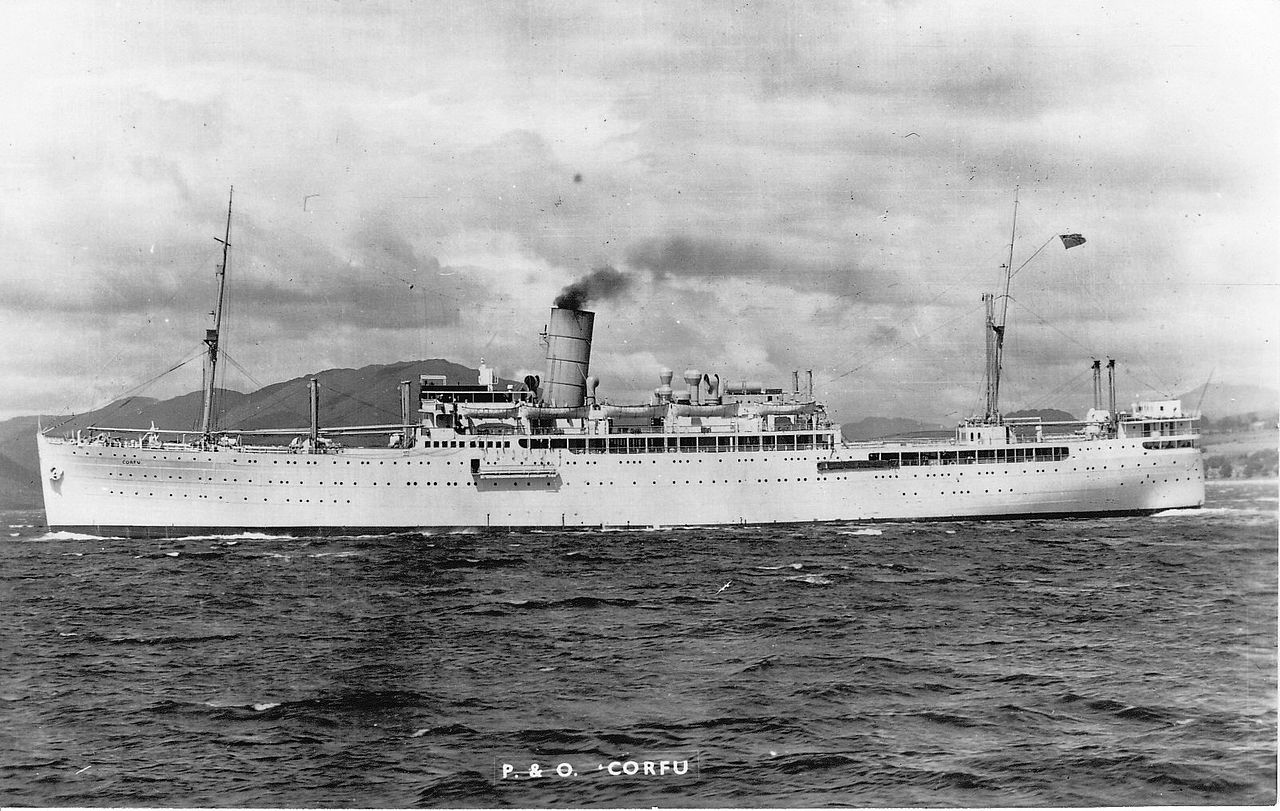 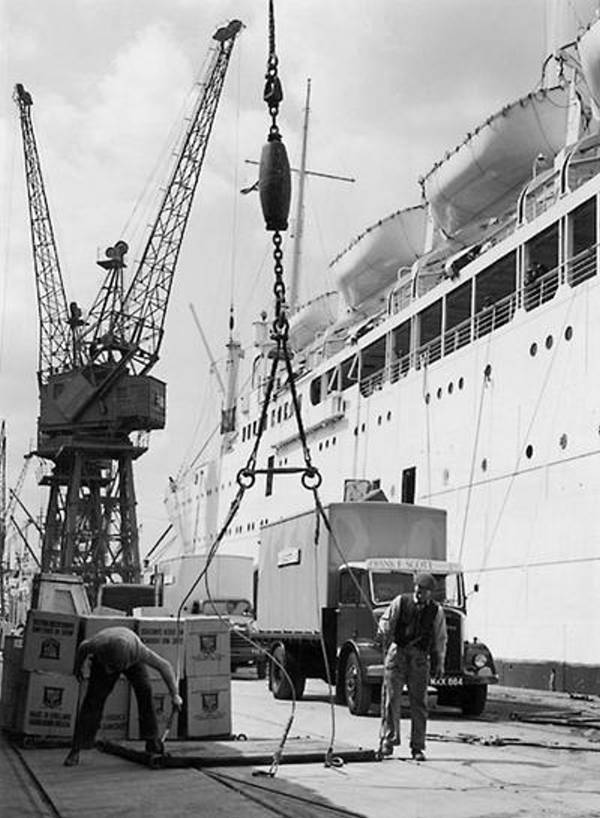 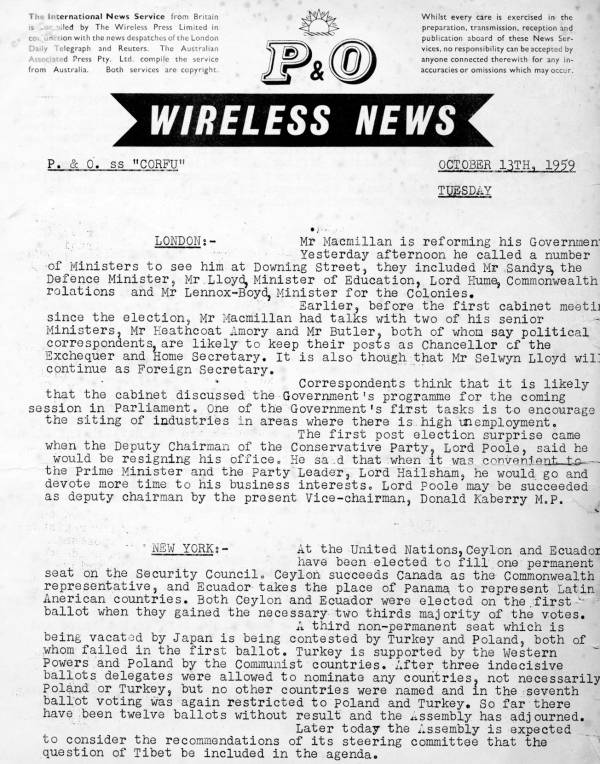 A fine waterline model of Corfu

Corfu was sold through Mitsui Bussan Kaisha of Japan for demolition, and handed over in London on the 20th April 1961, and re-named the Corfu Maru, for a cargo only voyage to Japan, with demolition commencing at the Miyachi Salvage Company Limited at Osaka on the 17th October.

I had just joined the ss Ballarat, as Cadet, and watched her sail from the King George V dock - her departure tinged with sadness. The end of another era......

I can remember all three of them, Corfu, Canton and Carthage, passing down the London River, with the Worcester abeam to starboard, and calling them up on the Aldis lamp;

AA, AA,.......BT What ship.Where bound..... AR'
They always replied - many of the deck officers and cadets were Old Worcesters. 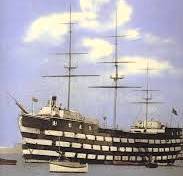